Washington, D.C. – As millions of taxpayers turn to paid tax preparers to help complete what, for many, is their largest financial transaction of the year, a coalition of consumer advocates and community organizations is releasing the findings of the second national poll showing broad public support for new consumer protections designed to prevent errors and fraud during the tax preparation process.

The poll also found that 68 percent of respondents believe that either their state government and/or the federal government requires paid tax preparers to be licensed—when in fact only four states (California, Maryland, New York and Oregon[i]) require mandatory standards for paid tax preparers who are not already credentialed as enrolled agents, attorneys, or Certified Public Accountants.

This poll, like the previous poll results released in 2016, found that more than 4 out of 5 respondents believe that paid tax preparers should be required to pass a competency test; be licensed by the state; and provide a clear, upfront list of fees before completing a taxpayer’s return.

“This second national poll commissioned by CFA not only shows that the public continues to support licensure and minimums standards for paid tax preparers, but also that 68 percent of respondents believe that licensure is already required,” said Michael Best, Senior Policy Advocate at the Consumer Federation of America.  “The extensive use of paid preparers, the high instance of problems with paid preparers, the public support of, and the misperception of many that such protections already exist, means that the time has long passed for minimum standards in this industry.”

The poll found that:

The complete results of the poll are available here.

The poll was commissioned by Consumer Federation of America in response to concerns about frequent errors and fraud by paid tax preparers that are used by millions of Americans.

In 2014, the U.S. Government Accountability Office (GAO) sent undercover investigators to 19 randomly selected tax preparer offices.  Only two of the 19, or 11 percent of the returns, had the correct refund amount.  The mistakes ranged from giving taxpayers $52 less to $3,718 more than they were entitled to.[iv]  Incorrect refunds harm consumers by returning less money than they are owed or exposing them to possible fines if they receive more than they are entitled to.  Several advocacy groups have conducted multiple rounds of mystery shopper tests of tax preparers and reached similar conclusions.[v] 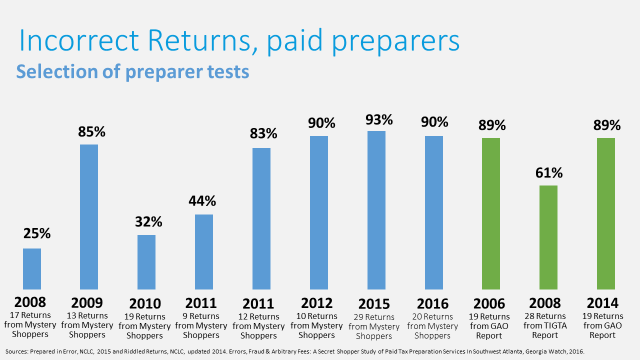 Forty-nine percent of poll respondents used a tax preparation company in the past five years.  The GAO estimates that approximately 56 percent of 145 million individual tax returns (81 million) and 59 percent of returns claiming the Earned Income Tax Credit (EITC) were completed by a paid preparer in 2011.[vi]

A training requirement, discussed in the poll results, makes particular sense for those who prepare tax returns for lower income consumers who rely on the EITC, as they can be severely impacted by an incompetent paid preparer.  A consumer can lose the credit for ten years if it was claimed but the consumer is later found to be ineligible.[vii]

CFA works with a coalition of national and state groups to promote consumer protections designed to prevent errors and fraud during the tax preparation process.

“The erosion of trust in our tax system is a symptom of how confused taxpayers are about the tax code and how it impacts them” said David Marzahl, CEO of the Center for Economic Progress in Chicago. “The survey results make clear that taxpayers need to have greater trust in those who prepare their returns and their desire for stronger consumer protections.”

“The poll results confirm what we continually hear from families across Colorado,” said Ali Mickelson, director of tax and legislative policy for the Colorado Fiscal Institute. “Most people assume tax preparers are already licensed and have minimum competency requirements.”

“You wouldn’t give your Social Security number to your stylist or your bank account information to a hot dog vendor. Yet these people are more regulated than tax preparers entrusted with your most sensitive financial information.”

“Choosing the right tax preparer can seem like playing ‘pin the tail on the donkey’ and a bad choice can really haunt you because even taxpayers who pay for help are personally responsible for mistakes on their taxes,” said Linda Sherry, director of national priorities for Consumer Action. “The poll results show how much confusion there is among consumers on this issue. The poll is just more proof of why licensing and minimum standards for paid tax preparers is so crucial.”

“It is time Florida provided licensure and some minimum standards for paid tax preparers. The polls show what we have heard repeatedly from Florida consumers – the assumption that all paid tax preparers are already required to do this, stated Alice Vickers Director of Florida Alliance for Consumer Protection. “Consumers need that protection from error and fraud in the preparation of their taxes.”

“These poll results are similar to findings from our 2016 study of paid tax preparation services in southwest Atlanta. In our survey of consumers, we found that most did not know their most recent tax preparer was not licensed by the State of Georgia, said Beth Stephens, Sr. Director of Public Policy and Advocacy with Georgia Watch.  “This report further demonstrates the need for legislation that provides transparency and protections for consumers.”

“Data clears shows what we have seen for years – there are consistent quality and competency issues with paid tax preparers. Overwhelming public opinion supports increased transparency and accountability. Inflated refunds hurt taxpayers who have to pay them back and our federal and state budgets,” says Robin McKinney, Director of the Maryland CASH Campaign.

“The poll results show that the majority of Americans incorrectly believe that either the federal or state government is protecting their interests by licensing preparers,” noted Chi Chi Wu, National Consumer Law Center ​staff attorney, “We are leaving American taxpayers woefully unprotected by failing to adopt preparer licensing that is ​in ​line with consumer expectations.”

The Consumer Federation of America is an association of more than 250 nonprofit consumer groups that was established in 1968 to advance the consumer interest through research, advocacy and education.

Founded in 1990, the Center for Economic Progress (CEP) helps low-income, working families as a trusted provider of tax and financial services. Everything we do, from direct service to informing public policy, improves the financial stability of those we serve. Operating one of the largest and oldest tax preparation programs in the country, CEP has been on the forefront of turning tax time into an opportunity for 300,000+ families to get ahead–returning more than $500 million in refunds to Illinois communities. For more information, visit www.economicprogress.org

Colorado Fiscal Institute is a nonprofit, nonpartisan organization that provides credible, independent and accessible analyses of fiscal and economic issues facing Colorado in order to inform policy debates and foster greater economic prosperity for all.  www.coloradofiscal.org

Consumer Action has been a champion of underrepresented consumers nationwide since 1971. A non-profit 501(c)(3) organization, Consumer Action focuses on consumer education that empowers low- and moderate-income and limited-English-speaking consumers to financially prosper. It also advocates for consumers in the media and before lawmakers to advance consumer rights and promote industry-wide change.

Florida Alliance for Consumer Protection is a nonprofit, nonpartisan enterprise whose mission is to advance consumer protection and tenants rights through research, education and advocacy.  www.flacp.org

Founded in 2002, Georgia Watch is a statewide consumer advocacy organization whose mission is to protect and empower Georgia consumers on matters that impact their quality of life. Through education, advocacy and policy development, Georgia Watch works to influence public policies to positively impact consumers, safeguard consumer protections in the area of personal finance, promote access to safe and affordable healthcare, encourage fair utility rates and renewable energy options, and protect consumers’ right to seek redress in a civil court of law when they’ve been harmed in the marketplace.

The Maryland CASH Campaign is a statewide network of organizations that promotes programs, products and policies that increase the financial security of low-to moderate-income individuals and families across Maryland. Maryland CASH advocates on behalf of these families, as well as provides financial education programs such as the Maryland CASH Academy at http://www.mdcashacademy.org/. Their partner organizations provide free tax preparation sites offering access to appropriate financial services and benefits screening.  For more information, contact Ms. Robin McKinney, Director of the Maryland CASH Campaign, at robin@mdcash.org or 443-692-9422. www.mdcash.org @Maryland_CASH @MDCASHAcademy

Since 1969, the nonprofit National Consumer Law Center® (NCLC®) has worked for consumer justice and economic security for low-income and other disadvantaged people, including older adults, in the U.S. through its expertise in policy analysis and advocacy, publications, litigation, expert witness services, and training. www.nclc.org

[i] Oregon does not exempt enrolled agents but has less stringent requirements for them to be become a Tax Consultant.

[viii] Oregon does not exempt enrolled agents but has less stringent requirements for them to be become a Tax Consultant.