Washington, D.C. — In response to the administration’s proposal to roll back money-saving fuel efficiency standards, the Consumer Federation of America is releasing a new analysis of government crash tests showing that today’s tougher, lighter-weight, more fuel-efficient vehicles are also safer.

“Our government’s crash tests provide unequivocal evidence that mileage has improved along with safety,” said CFA Executive Director Jack Gillis. “For the Trump Administration to base any part of the fuel economy rollback on safety concerns is flat-out wrong and completely ignores the facts that they, themselves, have produced.”

“The bottom line here is that safety is not jeopardized by increased fuel economy,” said Gillis, who is also author of The Car Book from the Center for Auto Safety. “In fact, Americans are enjoying the safest, cleanest, most fuel-efficient vehicles they’ve ever known.”

NOTE: Of the seven vehicles that increased in weight (some very slightly), only one has a worse fuel economy and all got the same or better crash test result.

The research concludes that, based on NHTSA’s own 2018 crash test results, 23 of 24 models had better fuel efficiency, no vehicle got a lower safety rating, and 10 got better ratings.

Reducing Weight and Improving MPGs Does Not Degrade Safety:

As Fuel Efficiency Increases, So Have Critical Vehicle Safety Features

In addition to crash tests, CFA also examined 17 critical safety features.[i] We found that all of the 2018 models increased the number of safety features available by an average of 2.4 — clearly showing that today’s vehicles are safer and more fuel efficient.

Of these 24 vehicles, all but one increased their fuel efficiency and every one had equal or better crash tests and more safety features than the previously crash tested version of the vehicle. 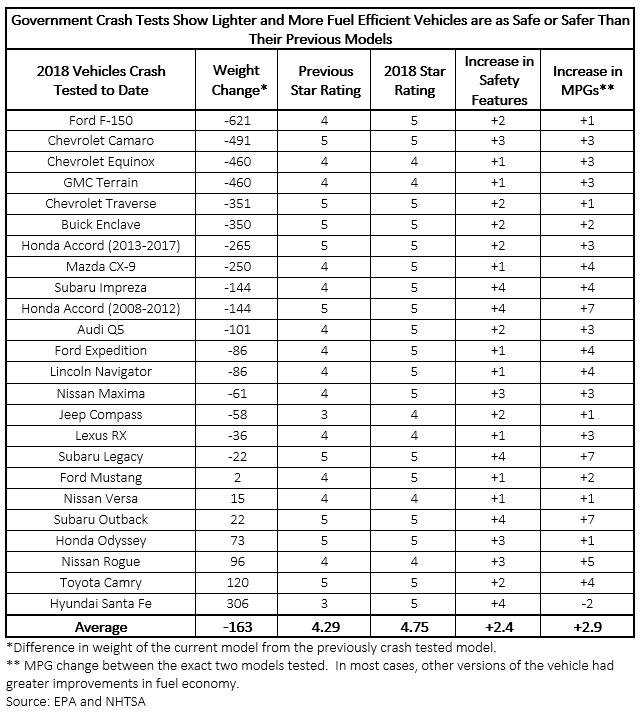 “It is profoundly disturbing that our own government has spent millions of taxpayer dollars on crash tests and monitoring safety features showing that better fuel efficiency has zero impact on safety, only to have the Trump Administration ignore its own data and try to use ‘safety’ to justify a rollback of standards that will save Americans millions of dollars at the gas pump,” said Gillis.

“To play the safety card as they roll back these standards is the height of hypocrisy,” added Gillis. As reported by the Advocates for Highway and Auto Safety, NHTSA has at least 10 critical, overdue, Congressionally-mandated safety regulations stagnating because of agency inaction. “If the agency was genuinely concerned about safety, it would focus its attention on protecting the public and getting these life-saving policies in place rather than protecting the oil industry by rolling back reasonable, achievable and money-saving fuel efficiency standards,” said Gillis.