Washington, D.C. — Polling data from the Consumer Federation of America (CFA) shows that a significant majority (78%) of Americans support the nation’s current fuel economy standards. Notably, the survey[1] analyzed in, Consumer Attitudes Toward Fuel Economy Standards, finds that support for the standards is bipartisan, with 66% of Republicans, 92% of Democrats, and 76% of independents supporting the standards.

“Americans understand the impact of volatile gas prices on their pocketbooks and the current fuel economy standards, in place since 2012, are the best protection to keeping our hard-earned dollars from going to oil companies,” said Jack Gillis, CFA’s Executive Director and co-author of the report.

In contrast to rolling back the standards, 78% of the survey respondents favored increasing federal fuel economy standards to 40 MPG by 2025 and half reported opposition to the Trump Administration’s rollback.

When asked about the expected fuel economy in their next vehicle, the mean answer from consumers was 41 MPG – slightly above the target for the standard in 2025. Overall, only 45% of all respondents want the reduced Trump target of 30 MPG or less, whereas 55% would like to get above 30 MPG. In fact, about 18% of the respondents want more than the current fuel economy target of 40 mpg by 2025.

“Given that the current standard is, in fact, achievable by the industry, was agreed to in 2012 by all of the car companies, meets consumer desires, helps companies sell cars, and saves consumers money that will be injected into the economy for goods and services other than oil-based gasoline, the Administration is making a huge mistake with its rollback,” said Gillis.

Since CFA began surveying consumer attitudes toward fuel economy in 2007, the overall trend of consumer support for fuel economy standards has been steady at a high level (See Figure 1). “Even during the recent years of lower gas prices, the level of support has remained strong and consistent,” said Dr. Mark Cooper, CFA’s Director of Research and report co-author. 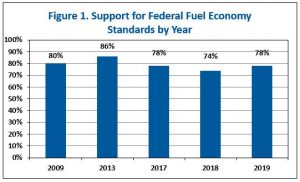 The survey also looked at support in those states dependent on the auto industry, (Indiana, Michigan, Missouri, and Ohio), and found that 77% of the people in those states supported the standards.  “It’s no surprise that those areas dependent on the auto companies support the standards, because they know what happened to their jobs and the industry during the last gas crisis,” said Gillis.

Consumers, Across the Board, Don’t Want Trump to Roll Back Fuel Economy Standards

A strong majority of survey respondents, 71%, favored increasing federal fuel economy standards to 40 MPG by 2025, as opposed to the Trump Administration freezing them at about 30 MPG through 2026.  As mentioned above, support for the current standards, as shown in Figure 2, is very bipartisan. 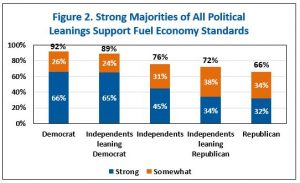 A Majority of Consumers Oppose a Rollback of Fuel Economy Standards

Consumers Overwhelming Want Good Fuel Economy in their Next Vehicle 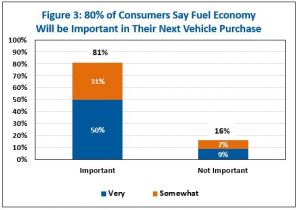 Consumers are Looking to 40 MPG Vehicles

As mentioned, when asked about the expected fuel economy in their next vehicle; 41 MPG was the mean choice number, which is slightly above the target for the standard in 2025. Political leanings and party identification give a noteworthy lens in which to look at the MPG consumers are expecting in their next vehicle, with Democrats wanting 46 MPG, independents expecting 42 MPG and Republicans wanting 34 MPG.  Overall, only 45% of all respondents want the lower Trump 2026 target of 30 MPG or less, whereas 55% would like to get above 30 MPG. In fact, about 18% of the respondents want more than the current fuel economy target of 40 MPG by 2025. 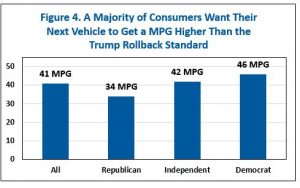 Over the past decade, our analysis has shown that improving fuel economy helps automakers sell cars. When asked whether making more fuel efficient cars would increase sales, 74% of respondents agreed (38% strongly).[2]  From a political perspective, 59% of Republicans agreed that increased fuel economy would sell more cars as did almost a universal majority of Democrats (87%). 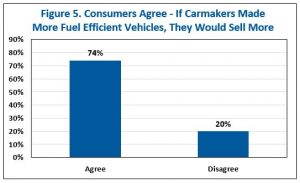 Republicans are Conflicted about the Rollback

Among the questions in the survey, respondents were asked two questions which resulted in conflicting sentiments: Do you support federal standards requiring auto companies to increase the fuel economy of the vehicles they manufacture? and What is your view of this proposal to reduce the standards?  In looking at responses from those identifying as Democrats, we found little conflict with 92% supporting the standard and 23% supporting a rollback of the standard.   However, those identifying as Republicans were markedly conflicted with 66% supporting the standard and by 71% supporting the rollback.   “One interpretation of these results is that Republicans do want a standard and more fuel efficient cars, but their kneejerk approach to government is fewer regulations”, said Gillis.

“The bottom line on the issue of the apparent “conflict” between support for standards and support for rollback can be summarized as follows.  About 85% of respondents make up a group that supports standards and/or opposes the rollback, while only 15% fall in the group that opposes standards and supports the rollback.  Moreover, over two-thirds (70%) of the latter group are Republicans or independents who lean Republican.  Thus, consistent support for the Trump administration proposal is very narrow and highly partisan,” said Cooper.

“Consumers across the board, regardless and of every political leaning, understand that fuel economy standards save them money, and therefore widely support fuel economy standards,” said Cooper. One of the best indications that the President’s efforts are ill-conceived is the fact that consumers in auto industry-dependent states want the standards.  They know firsthand what happens when gas prices go up, which they inevitably will,” added Cooper.

[1] The survey was conducted for CFA by Engine‘s CARAVAN® by cell phone and landline on March 7-10, 2019, using a representative sample of 1001 adult Americans. The survey’s margin of error is plus or minus 3.1 percentage points.

[2] In fact, these respondents are correct.  In a recent CFA analysis of the relationship between fuel efficiency and sales SUVs, Crossovers and Pickups with High Mpg Percent Increases Sell Better (August 15, 2018) we confirmed that increasing fuel economy resulted in a corresponding increase in sales.