Washington, D.C. — Today, Congresswoman Jan Schakowsky, a Senior Chief Deputy Whip and Chair of the Energy and Commerce Committee’s Consumer Protection and Commerce Subcommittee, introduced the Stop Tip-Overs of Unstable, Risky Dressers on Youth (STURDY) Act of 2021. Tipping furniture presents a serious risk of injury and death to children. Furniture or items on top of furniture such as TVs can fall onto a child, causing the child to be crushed, trapped, or struck by falling objects. U.S. Senator Bob Casey (D-PA) is introducing the Senate version of the bill.

“As parents juggle supervising their children while working from home during the ongoing pandemic, families deserve peace of mind that their furniture is safe. Sadly, current voluntary furniture stability standards are inadequate, and unstable furniture continues to be a top hidden household hazard. Every forty-six minutes, a child is injured in a tip-over incident. Between 2000 and 2019, tip-over incidents have been linked to more than 460 child fatalities. Today, I’m reintroducing the STURDY Act to protect children from these preventable dangers and spare families from these painful situations resulting simply from a piece of furniture,” said Congresswoman Schakowsky.

“Furniture tip-overs can put our Nation’s children in danger. The STURDY Act directs the CPSC to establish a stronger, mandatory stability standard to help protect kids from being injured or killed by tip-overs of chests, dressers and bureaus,” said Senator Casey. “Congress must quickly pass this legislation to stop the hundreds of preventable injuries, and even deaths, that impact children and families across the country each year. I commend the CPSC for their important work on addressing furniture tip-overs and making homes safer for children.”

Clothing storage units, including chests, bureaus, and dressers, are a major category of furniture at risk for tipping over. Opening drawers or doors can cause top-heavy units to tip. In addition, young children frequently climb on these furniture units unsupervised, increasing the risk of an accident. There have been several toddler deaths linked to falling dressers, as recent as last week when a 1-year old died in Atlanta. 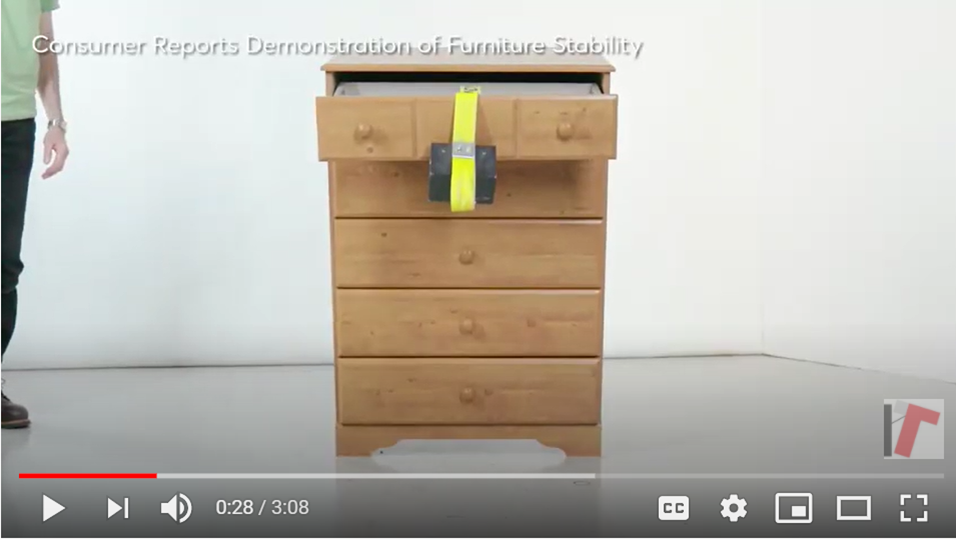 This legislation is supported by several consumer groups, including Parents Against Tip-Overs, the American Academy of Pediatrics, Public Citizen, Kids In Danger, the Consumer Federation of America, and Consumer Reports.

“Passing the STURDY Act is imperative to the safety of young children across the nation. Despite more than 16 years of educating parents and caregivers about the dangers of furniture tip-over and the importance of anchoring furniture, only about 1/4 of Americans actually anchor their furniture. A voluntary standards process for furniture safety that is now 20 years old has not changed the fact that an average of 11 children are rushed to the ER every day when a dresser/clothing storage unit falls on them. Requiring all manufacturers to build safety and stability into the design of dressers and other clothing storage units as outlined in the STURDY Act is long overdue. Of the 459 children killed by TVs or furniture since 2000, over half of those deaths occurred in their bed room. The STURDY Act would greatly reduce these statistics and save lives,” stated Kimberly Amato, Founding Member of Parents Against Tip-overs, Mom to Meghan.

“Parents should not have to worry about whether the furniture in their home is safe for their children. Far too many families have experienced the tragic loss of a child because they were unaware the furniture in their home posed a dangerous tip-over risk. The STURDY Act is a needed step forward to prevent more children from being injured and killed by furniture tip-overs, and the American Academy of Pediatrics calls on Congress to pass this legislation without delay,” said American Academy of Pediatrics President Lee Savio Beers, MD, FAAP.

“Rep. Jan Schakowsky understands the importance of robust product safety rules that protect our families from potential injury and death. We hope that Congress will quickly pass the STURDY Act,” said Remington A. Gregg, counsel for civil justice and consumer rights at Public Citizen.

“The STURDY Act will save lives by assuring that new dressers will be stable,” said Nancy Cowles, executive director of Kids In Danger (KID).  “This legislation is crucial to stop the continuing heartbreak of tip-over deaths. We urge Congress to quickly pass the STURDY Act.”

“Consumers expect that furniture in their home is stable and will not harm them or their children. Unfortunately, too many unstable dressers have posed serious risks to children. The STURDY Act is so important because it requires a strong mandatory rule to ensure the stability of our furniture,” stated Rachel Weintraub, Legislative Director and General Counsel of Consumer Federation of America. “The STURDY Act will prevent tragedies and save lives.”

“We need the STURDY ACT to help save lives and prevent furniture tip-over tragedies.  This bill has widespread support among parents, medical groups, and safety experts. Last year, a bipartisan coalition of policymakers came out in support of the STURDY Act.  Consumer Reports urges Congress to pass this bill right away so the CPSC can put a strong safety standard in place.  Quick action is critical to addressing this deadly hidden hazard,” stated Gabe Knight, Policy Advocate for Consumer Reports.

The STURDY Act directs the Consumer Product Safety Commission to adopt a stronger, mandatory stability standard for clothing storage units within one year of enactment, following the streamlined rulemaking process that it has used for numerous children’s products. This standard may be based on a voluntary standard such as ASTM’s but must include specific additional criteria to ensure children’s safety, including; an increased weight limit to simulate children up to six years old, testing under real world conditions such as climbing, carpeted floors, and open drawers, inclusion of smaller clothing storage units; and strengthened warning requirements.