Washington, D.C. – In advance of comments being submitted on Friday, opposing the government’s rollback of fuel economy standards, the Consumer Federation of America is today releasing an analysis of actual fuel efficiency increases among “all-new” 2018 model year vehicles.  It shows that improvements in MPGs not only pay for themselves, but also can pay for the cost of safety and design improvements.

“Our data clearly shows that car companies can meet the annually increasing fuel efficiency standards and deliver cost savings to consumers,” said Jack Gillis, Executive Director of CFA and author of The Car Book. “A rollback of these standards would force Americans to pay more at the pump, hamper vehicle sales and put U.S. car companies at a distinct competitive disadvantage to the Asian car companies who consistently meet and exceed U.S. and international targets.”

CFA’s analysis looks at “all-new” 2018 vehicles – these are the vehicles which manufacturers have had a chance to make significant fuel economy improvements.[1]  CFA compared the price and fuel efficiency of these vehicles with their 2011 predecessors, the year before the new standards were implemented.  In 2018, the 29 “all-new” vehicles had 20 direct 2011 predecessors.  These 20 models had 82 different versions with U.S. EPA MPG ratings.

Here’s How the “All-New” 2018 Vehicles Stacked Up in Fuel Efficiency and Cost:

The average cost of fuel economy improvements for these 82 “all-new” trims was $320 per vehicle. This technology saved buyers an average of $1,184 over 5 years of ownership, putting an average $864 back into their pocketbooks. “Not only is this a benefit to household finances, but the savings are generally spent on other goods, boosting the overall economy,” said Gillis. 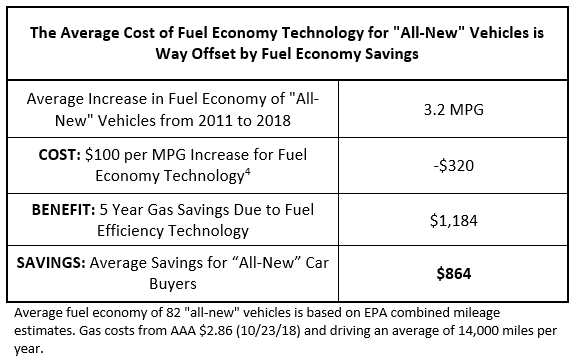 Auto manufacturers are making good progress in complying with the standards:

Comparing the sales figures for 2017[5] SUVs, crossovers and light duty trucks with the 2011 models, those vehicles whose fuel efficiency increased by over 15% had 20% higher sales than those with less than a 15% increase in fuel efficiency.

“Consumers want the performance and savings that fuel economy delivers,” said Gillis. “There is no justification, in terms of sales, fuel savings and automaker ingenuity, for rolling back the standards.”

[1] Each year only about 10% of the model year is made up of truly “all-new” vehicles.  Typically, when a new model is introduced, that vehicle essentially stays the same for 5-6 years.  This is called a “model series” and while there may be some style and feature changes during a model’s series, the mechanics of the vehicle generally stay the same.

[3] Based on the typical 5 year ownership cycle.