Washington D.C. — The Consumer Federation of America finds consumers understand the volatility of gas prices and the cost savings associated with more fuel efficient vehicles, as demonstrated by their purchase behavior. “At auto shows around the country, even in the face of lower gas prices, consumers show a strong desire for fuel efficiency standards,” said Jack Gillis, CFA’s Director of Public Affairs and author of The Car Book. The good news is that carmakers are fully capable of meeting the standards, today and going forward. Because consumers desire cars that go further on a gallon of gas, car companies are better positioned to keep up their recent record sales.

The Environmental Protection Agency and the National Highway Traffic Safety Administration are considering rolling back these money saving standards and bills in the House and Senate are actively seeking to reduce their benefits to consumers.

“At every opportunity, we’ve put our cost benefit analyses, including evidence on automakers’ ability to comply, in the public record, showing that the standards should not be rolled back,” said, Mark Cooper, CFA’s senior fellow. “To do so would not only rob consumers and the economy of hundreds of billions of dollars of savings, but violate the clear intent of the laws and the executive branch principles governing the setting of standards under which both NHTSA and EPA operate.”

Consumer Federation of America’s analysis of consumer attitudes over the past 15 years clearly demonstrates that consumers not only appreciate fuel economy standards, but that fuel efficiency plays a significant role in their purchase decisions. “In spite of fluctuating gas prices during the past five years, consumers have consistently supported fuel economy standards,” said Gillis. 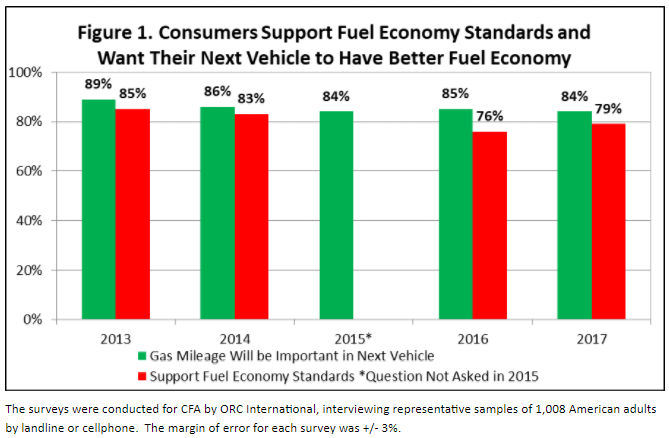 Consumers Understand that Gas Prices are Volatile and Rise Over Time

Consumer support for fuel economy standards, even with lower gas prices, is evidence that consumers correctly understand, and are concerned about, gas price volatility. “While consumers are enjoying current low gas prices, they have painful memories of how fluctuation in those prices can raid their bank accounts,” said Cooper. Consumers concern about both the volatility and ongoing increase in gas prices is warranted. The figure below shows historical gas prices in 2017 dollars and the upward trend since 1994. 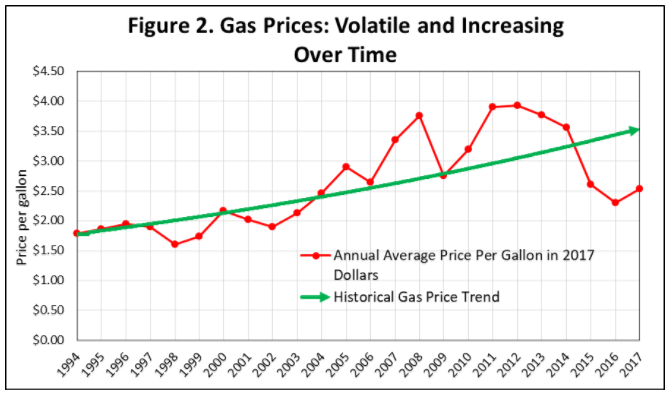 Based on driving 14,000 miles per year, the amount that consumers spend on gas each year varies considerably as gas prices change.  While these amounts are spread out over a year, they eat away at consumer pocketbooks.  The most recent gas price jump went from a July 2017 low of $2.30 to the current $2.54, increasing consumer costs from $1,288 to $1,422 in just over 6 months.  In addition, the chart also demonstrates the dollar benefits of a 5 mpg improvement in gas mileage (For pre-2007, the average gas mileage was about 20 mpg; in 2017 it about 25 mpg.) 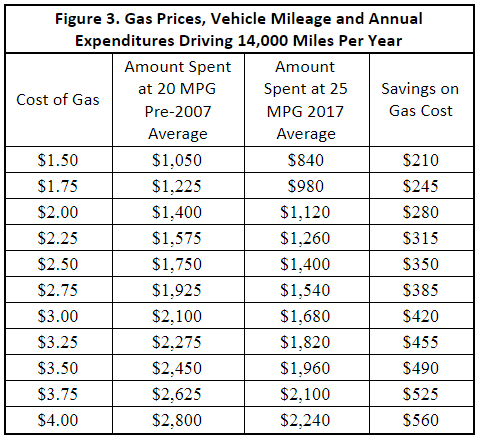 “Consumers get it. If the costs of improving vehicle fuel efficiency outweighed the benefits they received, consumers simply wouldn’t support the standards. Clearly, consumers do understand that the savings they receive from more fuel efficient vehicles far outweighs the cost,” said Gillis.

Consumers have already benefited from the current fuel efficiency standards with increased savings nearly every year since implementation in 2012. Figure 4 provides the savings in gallons of gas and dollars for each model year covered by the current fuel economy standards. [1]  The red line shows the number of gallons saved over 5 years for each model year considering the requirements in place for that year. The green line shows the corresponding dollars saved. Consumers who bought a 2015 vehicle meeting the standards will save nearly $500 and nearly 200 gallons of gas over five years compared to the average 2011 vehicle. Thanks to the gradually increasing standards, consumers who purchased a 2017 vehicle meeting the standards will save nearly $700 and nearly double the gallons of gas saved in five years. As gas prices inevitably creep up, these dollar savings will only increase.  “Unfortunately, the Trump Administration and Congress are considering rolling back or freezing the standards (agreed upon by car companies, consumer advocates, environmentalists, and unions); this would simply rob consumers of another half a trillion dollars of pocketbook savings,” said Cooper. 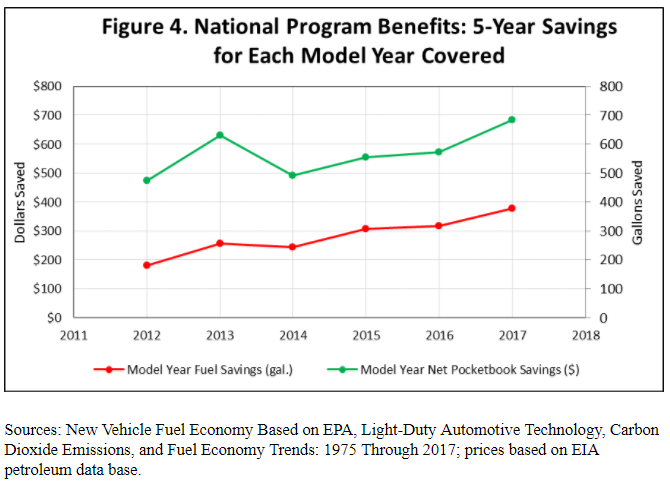 Thanks to the current standards, the percent of vehicles getting over 23 mph has increased significantly and the percent of gas guzzlers getting 16 mpg or less has diminished ten-fold. 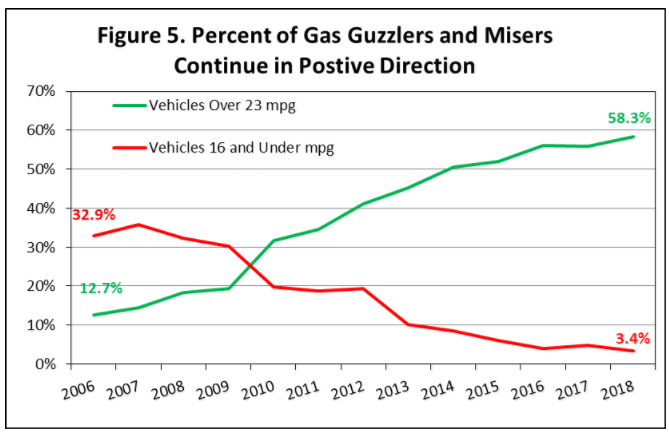 Looking at the 2018 models, the following chart (Figure 6) compares the percentage of each automaker’s models that are CAFE-compliant in 2018. 11 companies exceeded the average percentage (24%) of CAFE compliance for automakers as a whole. 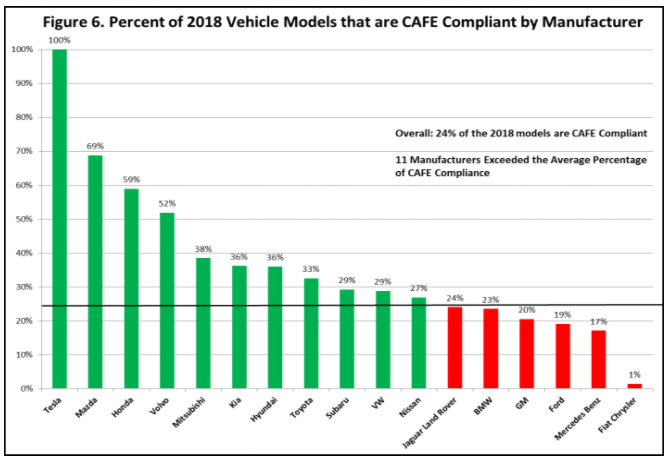 While Tesla, with its all electric models leads the pack as the most compliant, Mazda, has 69 percent of its models in compliance without using electrification. Volvo, who has not been known for fuel efficiency, has reached 52 percent compliance by introducing more plug-in electric vehicles.

Thanks to the Standards, Increasingly Popular SUVs Have Significantly Improved in Efficiency with a Corresponding Increase in Sales 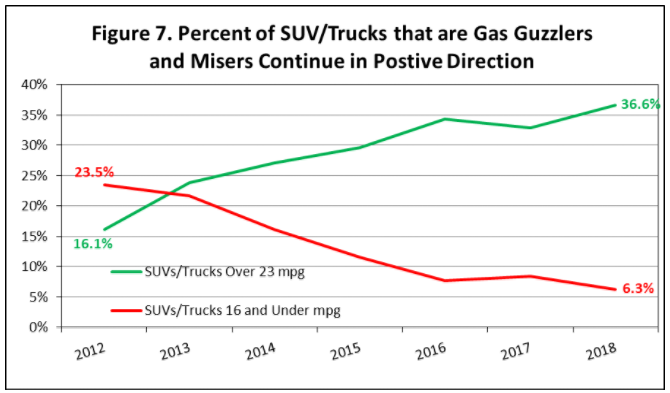 “Not only are SUVs, crossovers and trucks getting more fuel efficient, but those which increased their fuel economy the most are seeing the highest gains in sales,” said Gillis. According to recent report from CFA (see Figure 8), SUVs, crossovers and light trucks that increased their MPGs by more than 10% had significantly more sales than those who had less than a 10% increase in fuel efficiency.

Figure 9 provides additional evidence of why consumers understand the need for standards.  As the dotted green line from 1995 to 2006 shows, even though car makers promised fuel efficiency improvements in the face of increasing gas prices (red line) there was no real improvement.  However, when the Energy Independence and Security Act of 2007 kicked in, car makers started to make significant fuel economy improvements.  “The current fuel economy standards, agreed to by the car companies in 2012, further increased the pace of improvement, putting hundreds of dollars back into families’ budgets,” said Cooper. 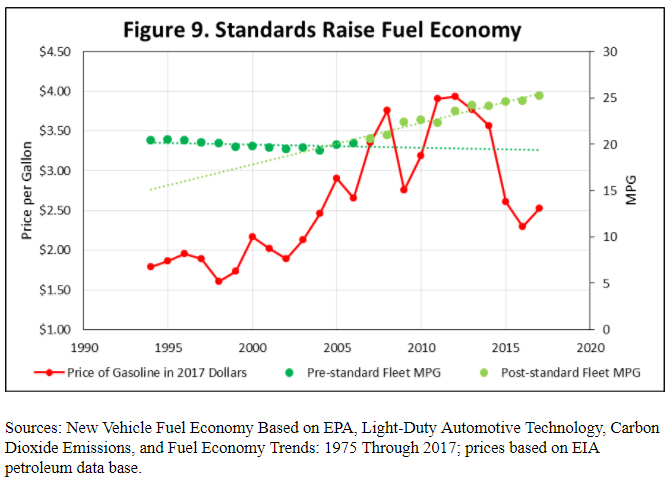 [1] We used actual prices where they are available; projected future prices to be constant at the current level; assumed that the cost of increasing fuel economy is $100 for every mile per gallon increase, (a conservative estimate based on historical information); assumed that the new vehicle is driven 15,000 miles in the first year, declining by 200 miles per year; and, multiplying the number of gallons saved by the annual price of gasoline.  Subtracting the cost of technology yields the net pocketbook savings