Washington, D.C. – Since COVID-19 rattled the world causing a significant change in the way Americans and people everywhere spent their time, CFA data documents that as people have been seeking outdoor recreation as entertainment, many states have seen increases in off-highway vehicle (OHV) incidents. At least sixteen states have documented increased OHV injuries between 2020-2021. Reports from doctors in Arkansas, California, Colorado, Florida, Georgia, Idaho, Kentucky, Louisiana, Minnesota, Missouri, North Dakota, Tennessee, Texas, Utah, Vermont, and West Virginia indicate increased emergency room visits as a result of OHV incidents. Consumer Federation of America (CFA) is issuing an alert to OHV riders to operate their vehicles with caution as summer is officially about to begin.

“We are alarmed at reports of increased numbers of OHV emergency room visits in hospitals in at least sixteen states. These increases are occurring earlier than usual due to COVID-19 and we hope that the increasing trend we have seen throughout this past year will not continue as summer begins,” stated Rachel Weintraub, legislative director and general counsel with CFA.

OHVs are comprised of all-terrain vehicles (ATVs), recreational off-highway vehicles (ROVs), and utility task vehicles (UTVs). According to data gathered by CFA and its OHV Safety Coalition, from 2013 through 2020 July is the month with the most OHV fatalities and May, June and August follow as the second, third, and fourth months with the most deaths. The day with the highest number of fatalities is July 4th. Even more troubling, July 4th is also the day of the year with the most fatalities of children aged 16 or younger.

“All OHVs, even youth models, pose risks. OHVs are fast, complex machines, and due to their design, they roll over easily. One wrong choice could lead to the emergency department or worse. Children younger than 16 years just aren’t ready for the demands of safe riding, so we encourage parents to find a different activity for their child,” said Dr. Gary Smith, President of the Child Injury Prevention Alliance.

CFA and its OHV Safety Coalition have been documenting OHV deaths since 2013 by compiling, analyzing, and making publicly available data and findings from relevant newspaper and government resources. From 2013 through 2020, CFA and the OHV Safety Coalition documented over 646 total deaths during the month of July for those years combined. For the entire time period, CFA has documented over 4,860 deaths. While these numbers are high, these findings are not yet complete and the number of deaths will likely increase as additional information becomes available.

OHV Fatalities in Each State 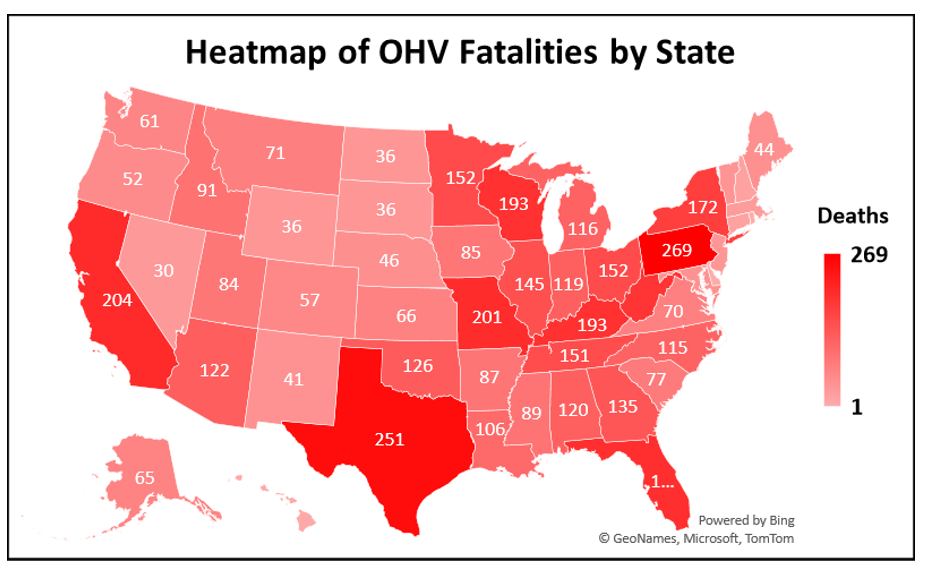 The Most OHV Fatalities Occur on July 4th

CFA data from 2013 through 2020 shows that the most fatalities for all people, children and adults, occurred on July 4th. Of the total 64 recorded deaths on July 4th occurring from 2013 through 2020, 16 were children aged 16 or younger comprising one quarter of all deaths. (25%). “On no other day of the year were there double-digit deaths for children age 16 or younger,” stated Weintraub. 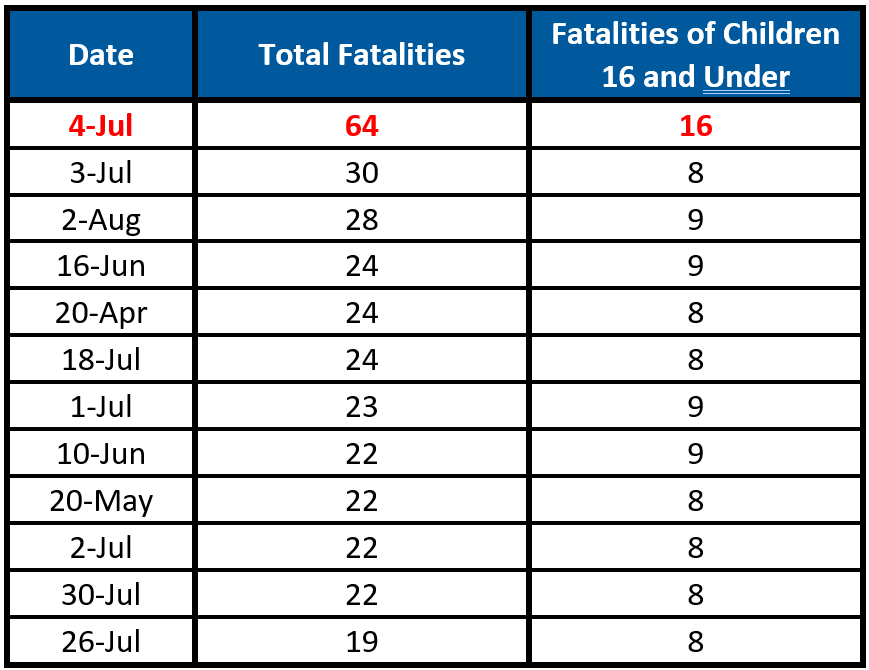 “July 4th has historically been the day with the most OHV deaths. OHV related incidents are already higher this year due to COVID-19 and we urge all OHV riders to prioritize safety so that this statistic will not be a reality again in 2021,” stated Weintraub. “Operators of OHVs must have the necessary skills to maneuver an OHV, should use appropriate safety equipment, such as helmets, should never operate on roads, and never carry passengers.” 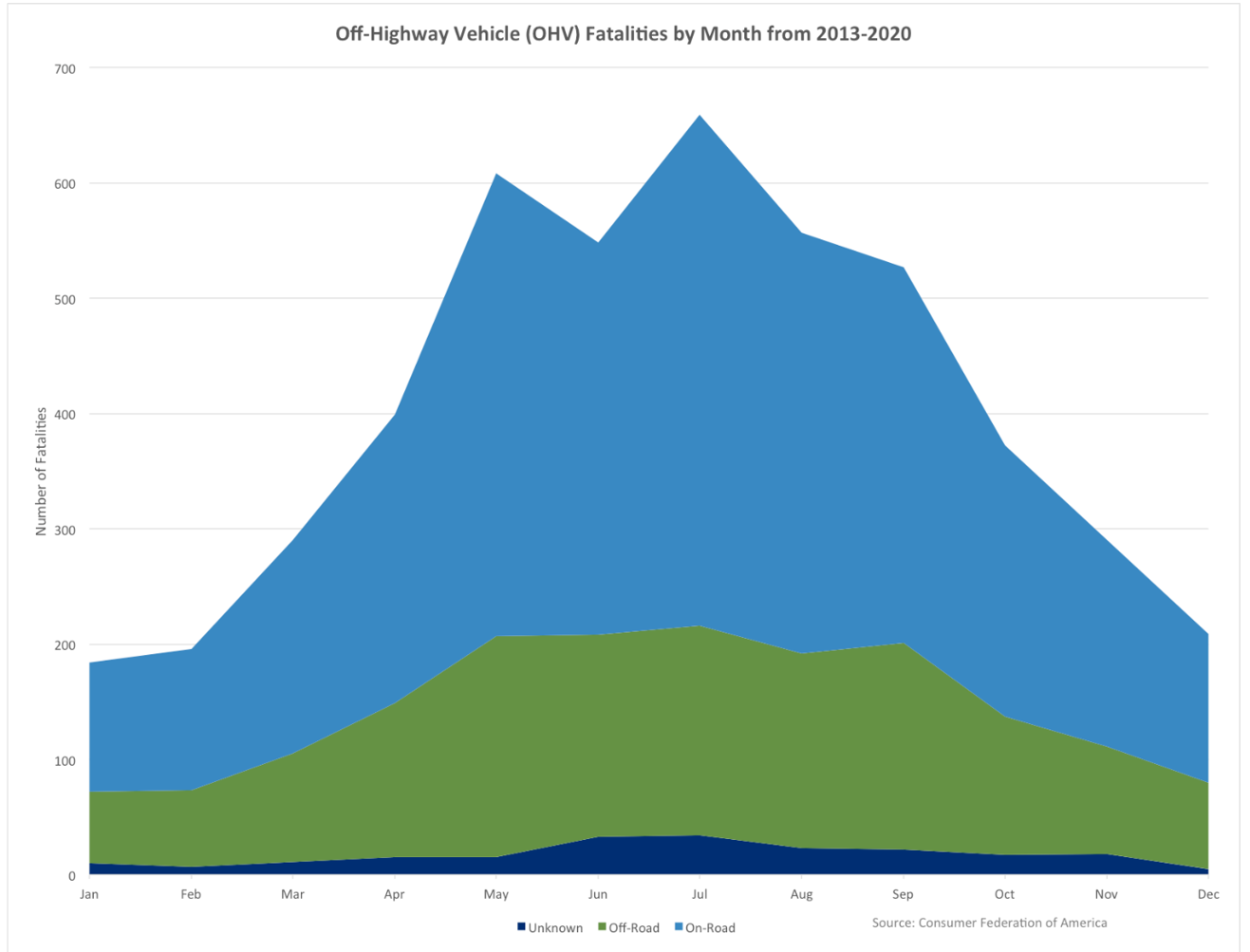 CFA has been working to minimize deaths and injuries from OHVs for decades by petitioning the CPSC to ban adult-size ATVs for children, by convening a coalition to prevent OHV road access, and with that coalition, by compiling fatality information in real time, and by urging the CPSC to collect annual ROV data among other requests to take steps to reduce OHV deaths and injuries.

If consumers have experienced an incident or injury involving an OHV, reports can be submitted to the CPSC at www.cpsc.gov.