A large majority of respondents (73%) have great or somewhat great concern over the future of gasoline prices.

A large majority (73%) have great or somewhat great concern over America’s dependence on Mid-Eastern oil.

A large majority of consumers (75%) say they would pay more for a new fuel-efficient car if they recouped the added expense within one year, and a majority (62%) would do so with a five-year payback period.

A substantial majority of Americans (60%) say that U.S. auto companies will be more profitable with a higher fuel economy standard over the long run.

A large majority (77%) say a higher fuel economy standard will help the U.S in general.

Almost three times as many respondents (46%) say they support the 60 mpg standard and are willing to accept a five-year payback than those who didn’t (16%).

A 60 mpg vehicle will save the typical car buyer more than $1,000 in gas costs over and above the increased car cost by the time the auto loan is paid off (typically 5 years) and $3,000 over the life of the vehicle (roughly ten years), which the consumer could capture in the sale price of the vehicle or by holding on to it.3 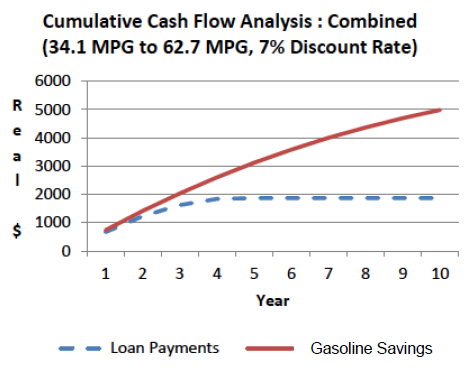 CFA and 21 other consumer groups from across the United States called on the Administration to set a standard of at least 60 mpg by 20254 because it will save consumers money and reduce the nation’s dependence on oil – a high priority for the American consumer.5

A fleet-wide car and light truck fuel economy standard of 60 mpg by 2025 is critical and necessary for consumer pocketbook protection.6

The Administration risks leaving hundreds of billions of dollars of consumer savings on the table by not setting the maximum feasible and economically practicable standard of 60 mpg by 2025.

The 2016 standard of 34 mpg set earlier this year by the EPA and NHTSA falls far shorter than what would be in the best interest of consumers.  A standard of 38 mpg by 2016 would have delivered additional benefits of $140 billion over the life of the vehicles covered.7

Studies by the National Academy of Sciences and the Massachusetts Institute of Technology show that the technology needed to achieve a 60 mpg fleet-wide average is technically feasible.8

The biggest obstacle to achieving the greatest consumer benefits through higher fuel economy is a reluctant auto industry.9

In the past, NHTSA has allowed the ill-informed plans of the auto industry to restrain the levels of standards.

The automakers have continuously fought standards that were in the best interest of consumers including seatbelts, the catalytic converter and other efforts to increase fuel economy.

[2] “SETTING THE NEXT ROUND OF FUEL ECONOMY STANDARDS: CONSUMERS BENEFIT AT 60 MILES PER GALLON (OR MORE),” August 2010.

[8] “SETTING THE NEXT ROUND OF FUEL ECONOMY STANDARDS: CONSUMERS BENEFIT AT 60 MILES PER GALLON (OR MORE),” August 2010.

[9] “SETTING THE NEXT ROUND OF FUEL ECONOMY STANDARDS: CONSUMERS BENEFIT AT 60 MILES PER GALLON (OR MORE),” August 2010.