Over the past several decades, income inequality has greatly increased as consumers struggle and corporate executives make massive profits. During the COVID-19 pandemic this trend continued and one industry saw especially large gains-auto insurance companies. A review of auto insurer executive compensation found that in 2020 and 2021 CEOs took home hundreds of millions of dollars, and one former CEO of GEICO received a gigantic golden parachute.

Nebraska has a century-old law (dating from the Progressive Era) that requires insurance companies to provide information about the salaries, bonuses, and other compensation of their top officials.[1] The Securities and Exchange Commission also requires this information to be disclosed. Consumer Federation of America reviewed these filings, and found that the CEOs of Nebraska’s largest auto insurers are making out like bandits. 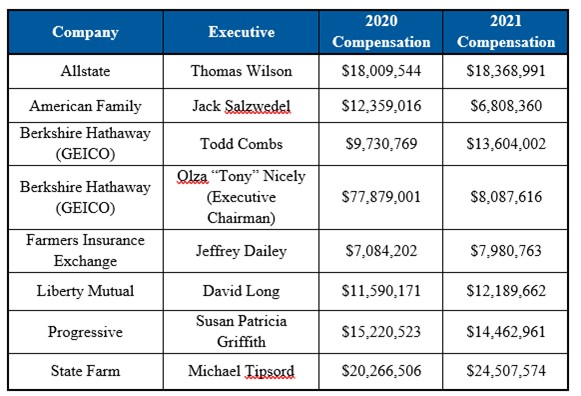 [1] Large insurers dislike this law, because it provides transparency and some accountability, and in 2014 USAA tried unsuccessfully to get the law repealed.

Even the lowest paid CEO, Jeffrey Dailey of Farmers, earned $7.08 million in 2020 and almost $8 million in 2021. Most CEOs earned substantially more. And the top four insurers paid their executives a combined total of $196.8 million, at a time when the 2020 median household income was $67,251. And despite these massive increases, the companies are currently demanding rate hikes from consumers who are required by law to purchase the auto insurance they sell.

By far the largest payout was a huge golden parachute to Olza “Tony” Nicely, the former CEO of GEICO. For twenty five years Nicely served as the CEO of GEICO; he stepped down in 2018 and became Executive Chairman of GEICO’s board, and then retired from that role at the end of 2021. GEICO rewarded him with a payout of $77,879,001 in 2020, at the very time that the company was earning huge windfall profits due to the pandemic-caused decline in miles traveled, auto crashes, and claims filed.

In fact, CFA specifically criticized GEICO for its stingy refund program. In the spring of 2020, most auto insurers bowed to public pressure and grudgingly gave back at least a couple of months’ premium to consumers. GEICO however only provided a 15% credit to its automobile customers if they renewed their policies between April and October 2020, or if customers purchased new policies.

In 2020, the Economic Policy Institute estimated that “CEO compensation has grown 1,322% since 1978, while typical worker compensation has risen just 18%. In 2020, CEOs of the top 350 firms in the U.S. made $24.2 million, on average — 351 times more than a typical worker.” This inequality has harmed consumers, and is making it more difficult for families to achieve upward mobility and the American Dream.

Consumers should have received additional premium refunds during the pandemic, when we were all stuck at home and roads were empty. Instead, auto insurers paid huge dividends to investors and awarded mega-bonuses to their CEOs. And in the meantime insurers have been raising auto insurance rates, claiming that they need to increase them in order to stay profitable. But when these insurance companies say that they need higher and higher rates to account for inflation, regulators should ask: If times are so tough that companies need to raise rates, why have they been paying out so much in executive compensation?

Since consumers and businesses are often required to purchase insurance by law or by banks in order to get a loan, states need to protect consumers from excessive executive pay. Two regulatory solutions are possible. First, states could follow Nebraska’s example and require insurance companies to report, in a public document, the salaries and other compensation of the company’s CEOs and other top executives. This will give policymakers and the public valuable information about where their premium dollars are going.

And second, regulators should adopt California’s consumer protection regulations. Under these rules, a formula calculates the maximum permissible executive compensation for the top five executives at each insurer – the amount differs depending upon company size. Once the permissible compensation is determined, while insurers may pay their executives whatever they want, any pay above the maximum is figured into another formula that reduces insurance rates to account for the excessive compensation.

Consumers should be paying insurance premiums based on risk, not funding overpriced executive salaries and bonuses.