A Consumer Federation of America (CFA) analysis of off highway vehicle (OHV) recalls found that over the past 10 years, there have been 123 OHV recalls, and the number of recalls has increased from two recalls in 2010 to 17 recalls in 2018, and 16 in 2019. In 2020, there were also 16 OHV recalls. OHVs include all-terrain vehicles (ATVs), recreational off-highway vehicles (ROVs), and utility task vehicles (UTVs). CFA’s analysis of U.S. Consumer Product Safety Commission (CPSC) OHV recall reports since 2010 found that the highest number of recalls occurred from January 1, 2016 to January 1, 2019.

In addition, CFA analysis of CPSC OHV recall reports from January 1, 2010 through December 31, 2020 found that 19 brands[1] were involved in the recalls, and the brand with the most recalls (over triple that of the brand with the second most recalls) was Polaris.[2] CPSC reports identified at least 71 injuries and two deaths linked to OHVs that were subsequently recalled. Also, nearly two-million[3] OHVs were estimated to be sold and subsequently recalled.

From January 1, 2010 through December 31, 2020, a total of 123 recall notices were identified. Nineteen brands were involved in the notices, and the brand that had the most recall notices during the period was Polaris. Figure 1, below, shows the number of OHV recalls during the report period. In 2017, there were a total of 24 recalls—the highest number of recalls in a single year during the period analyzed. In 2019, there were 16 recalls. In 2018, there were 17 recalls and in 2016, there were 16 recalls. In 2011, there was one recall, but the following year the number of recalls increased to nine, a nine-fold increase, which was the highest increase, between years, for the time period analyzed by CFA. 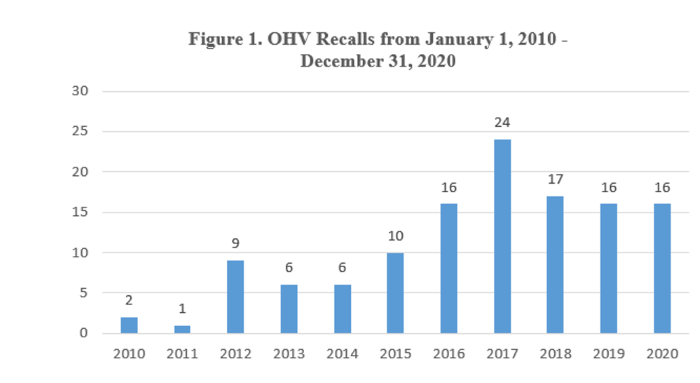 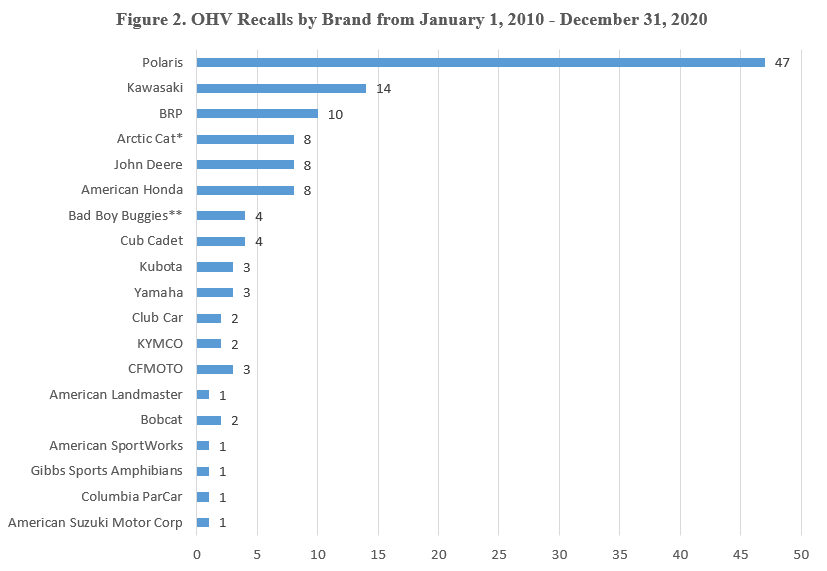 There are numerous reasons why OHVs have been recalled, and CFA was able to identify some patterns. For example, looking at the entire period, the cause of the most recalls is fire hazards. Fire related hazards accounted for 52 recalls (42%). The second most common hazard indicated in the OHV recall notifications related to throttle issues which accounted for 18 of the 123 recalls, or 15%. The third most common hazard identified as the cause of OHV recalls involved steering related issues which made up 14 recalls (11%). These top three hazards represent nearly three-quarters of hazards that led to recalls (68%).

Injuries or deaths were involved in about one in five OHV recalls. Out of the 123 recalls analyzed, 25 recalls (20%) involved at least one injury. Tragically, the most serious involved two deaths. The most recent documented death associated with a recall occurred in January 2017 and involved the rollover of an OHV that was subsequently recalled because it did not have seatbelts, resulting in the death of a 14-year-old passenger. The second death occurred in April 2016 on an OHV that caught fire (the specific part of the vehicle that caught fire was not identified) and then rolled over, resulting in the death of a 15-year-old passenger.

There were 71 injuries included in the recall notices. The CPSC did not always identify the severity of the injuries, but of the 71 injuries included, there were at least two severe injuries. One individual suffered a serious leg injury after a rollover incident (the vehicle in this incident was part of the same recall as the January 2017 death above). And the second severe injury included a young child who suffered severe burns after an ROV caught fire (this recall noted that an additional five people suffered burn injuries but did not indicate that they were severe).

For every recall issued, the CPSC estimates the number of impacted vehicles sold. For the 123 recalls analyzed, the CPSC estimates that 1,928,585 vehicles subsequently recalled were sold. The recalls that involved the largest number of OHVs were two Polaris recalls and two American Honda recalls. The first Polaris RZR ROV recall impacted approximately 133,000 vehicles, in April 2016, and was due to the risk of the vehicle catching fire and involved the largest number of vehicles recalled during the period analyzed.

The second highest number of individual vehicles involved an American Honda Pioneer ROV, recalled due to problems with the electric power steering. This recall occurred in December 2020 and involved about 118,600 vehicles. The recall with the third highest number of vehicles was the second Polaris RZR ROV recall. This vehicle was recalled due to heat shield problems and affected approximately 107,000 vehicles. The fourth largest recall involved 82,000 American Honda ROVs recalled in June 2019 due to the throttle pedal sticking in the open position.

OHV companies must do everything necessary to ensure the safety of their products. While we applaud companies for taking responsibility and recalling their products, problems should be identified before the products enter the marketplace and pose risks to consumers. We urge companies to continue to voluntarily recall products with the CPSC and not unilaterally take actions that are not recalls. This analysis identified that more OHV recalls have been occurring more recently. These recalled OHVs have been involved in incidents resulting in at least two deaths and 71 injuries. The CPSC must investigate why the number of OHV recalls are increasing and take steps, along with OHV manufacturers, to prevent these tragedies and improve the safety of these vehicles.

Appendix: Links to CPSC OHV Recall Reports
From January 1, 2010 through December 31, 2020.
Note: if highlighted in gray, that action was a unilateral action taken by the company.