Washington, D.C. — Structural racism is being maintained in auto insurance, making state-mandated auto coverage more expensive for African American drivers than white drivers, according to research conducted by the Consumer Federation of America (CFA). The pricing disparities are driven in part by the use of several socio-economic “factors” in premium setting that do not reflect personal driving history but are proxies for race.

Over the past decade CFA has issued several reports showing that auto insurance rating factors tied to individuals’ socio-economic circumstances raise premiums for lower-income customers with clean driving records. What regulators, policymakers, and insurance companies must also acknowledge and address is that these socio-economic factors, which have nothing to do with driving, also disproportionately harm African-Americans.

“When insurers base premiums on drivers’ socio-economic status, they are invariably doing so in a manner that disproportionately targets African Americans with higher prices,” said CFA’s insurance expert Doug Heller. “The companies will insist that they never ask for a customer’s race, but if they are serious about confronting systemic racism, it is time they recognize that their pricing tools use proxies for race that make government-required auto insurance more expensive for black Americans.”

Based on extensive testing and reviews of publicly available regulatory filings across the country over the past several years, CFA has found that most auto insurance companies use at least some of these non-driving factors to lower or raise rates for drivers with the particular characteristic. Auto insurance companies often charge higher premiums to:

African-Americans are disproportionately represented in the higher premium categories, as Table 1 illustrates, which leads to higher prices for the exact same coverage, even before considering geographic pricing disparities. CFA found, in a 2015 report, that ZIP codes with predominantly African American residents face premiums that are 60% higher than predominantly white ZIP codes, after adjusting for population density. Taken all together, it is clear that African Americans will pay more for auto insurance than white drivers, even when everything related to driving safety and vehicle type is held constant. 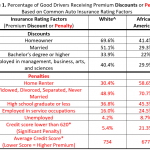 ^ Unless otherwise cited, all data are from the U.S. Census Bureau 2018 American Community Survey, US Census groups “White alone” and “Black of African America alone”
* Credit Score of homebuyers (2010) according to U.S. Federal Reserve (Table 15, Page 37)

While insurers claim that these factors are race neutral, in practice they harm African-Americans far more than white Americans. The impact of higher premiums goes beyond the pocketbook and interacts with broader elements of systemic racism. Because insurance is required in every state but New Hampshire, the disparate pricing likely causes higher levels of uninsured driving among African Americans and higher incidence of state uninsured driving penalties for African Americans, which can include fines, car impoundment, and jail. It also means less access to vehicles and reduced access to jobs, as the nexus between car ownership and employment opportunity is well established.

In recent weeks, insurance executives have spoken about the need to be more understanding of systemic racism in America and announced their support for challenging the status quo. Taking on that task will require looking in the corporate mirror and making changes to business models that perpetuate structural racism, according to CFA.

CFA noted that there are other pricing factors beyond those in Table 1 that contribute to higher rates for drivers of color. These include charging higher rates to drivers who previously had lapses in coverage, purchased low-limits policies, or purchased coverage from a non-standard carrier. To truly reform the insurance market, the whole rating process should be placed under a microscope in order to end racially discriminatory pricing.

Several states have taken action in some of the areas. Three states (California, Massachusetts, and Hawaii) prohibit the use of credit history in auto insurance rating. California also prohibits penalties for a lapse in prior coverage. In 2017, the New York Department of Financial Services issued a regulation largely prohibiting the use of education level or occupation in rating, and in 2019, the state of Michigan also outlawed those factors. Clearly, according to CFA, much more has to be done by policymakers and companies.

“In every state, unfair discrimination is illegal, yet, on average, African American drivers still pay more for the exact same insurance coverage as white drivers. As long as insurance companies continue to use these proxies for race when setting rates, the industry will remain a part of the problem as will the regulators who allow it,” said J. Robert Hunter, CFA’s Director of Insurance and former Texas Insurance Commissioner.