The Funeral Consumers Alliance of California, the Funeral Consumers Alliance (FCA), Consumer Action, and the Consumer Federation of America (CFA) have written to the California Funeral and Cemetery Bureau urging the agency to investigate this issue and require compliance with the law.  When the groups first surveyed compliance earlier this year, 23 funeral homes appeared to be violating the law.  Knowledge of the consumer survey has apparently encouraged most of these homes to begin listing prices.

The average cost of a full-service funeral is more than $7,000, and surveys by CFA, FCA, and FCA affiliates reveal that there is wide variation in prices among funeral homes.  Even simple, direct cremations can range in price from about $600 to more than $3,000. In addition to the financial burden, most consumers who purchase a funeral must do so under time pressure and in a state of emotional distress.  “Ensuring that consumers could access price information online would ease the time and emotional pressures that they face,” said Jean Okuye, President of the Funeral Consumers Alliance of California.

FCA and CFA have petitioned the Federal Trade Commission to update the Funeral Rule to require posting of required price lists on their websites.  In the meantime, they have begun to research funeral price posting in many cities and counties throughout the U.S. with particular focus on California.  “Consumers who have suffered the unexpected death of a loved one cannot be expected to drive around to funeral homes to collect price lists,” said CFA senior fellow Stephen Brobeck.  “It is very easy for funeral homes to ease this consumer burden by posting their existing price list,” he added. 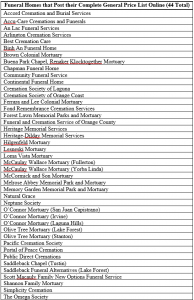 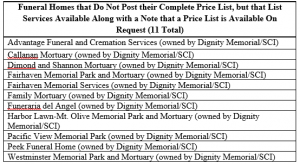 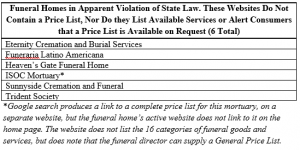