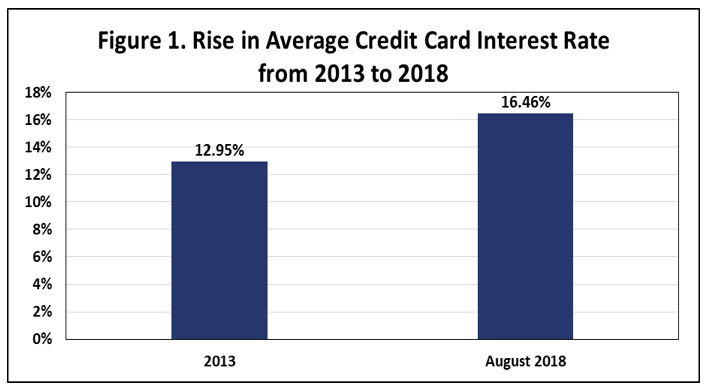 “As interest rates have risen, financing holiday purchases with credit cards has grown more expensive,” noted Steve Brobeck, a senior fellow at the Consumer Federation of America (CFA). “Consumers with high credit card debt levels should be particularly cautious about increasing their debt during the holiday season,” he added.

Credit card debt, as well as interest rates, has also increased significantly in the past several years.  According to Federal Reserve Board data, outstanding revolving credit rose from $855.6 billion in 2013 to $1,041.4 billion in August 2018, an increase of 22%.[3]  Consumers are not paying interest on a portion of this debt since it includes new balances that are paid off at the end of the month.  And a small portion of the outstanding credit represents debt from overdraft loans.[4]  Yet, in 2018 consumers will still be paying tens of billions of dollars more in credit card interest than they did in 2013.[5] 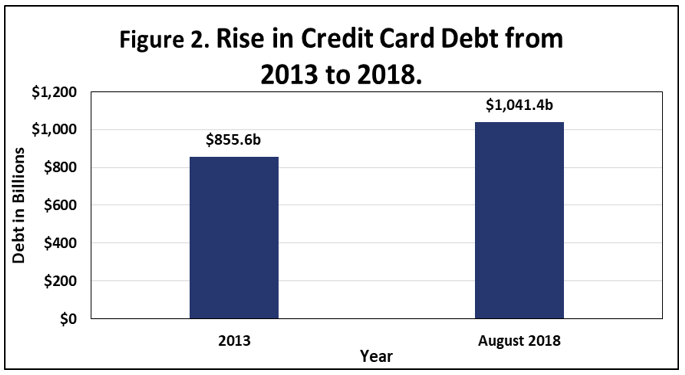 The credit card interest rate hike is significantly higher than the rate increase for other types of consumer credit, as the Federal Reserve data below indicates.

[1] Federal Reserve Board, Consumer Credit G.19 release (November 7, 2018).  The assessed interest rate is the one charged on outstanding balances, not the one, also reported, for all credit card accounts.

[3] Federal Reserve Board, G. 19 release, loc. cit.  The August figure was used to be comparable to the latest reported interest rate figure.  The November release reported August figures for both statistics but only the September figure for outstanding credit (which at $1041.1, was virtually identical to the August figure).

[7] Historic delinquency and charge-off rates on credit cards for all commercial banks, for the 100 largest banks, and for all smaller banks are reported by FRED (Federal Reserve Economic Data) maintained by the St. Louis Federal Reserve Bank.