Washington, D.C. – A new report by the Consumer Federation of America (CFA) on residential real estate commissions – The Relationship of Residential Real Estate Commission Rates to Industry Structure and Culture – shows that buyer agent commissions are highly uniform.  This rate uniformity is strongly supported by the industry’s compensation system in which home sellers pay the commissions of both the listing agent and the buyer agent.  Uncoupling (or untying) seller and buyer agent compensation would spur price competition that would substantially reduce the some $100 billion in commissions paid annually by consumers.

“The current commission system is designed to thwart price competition among agents,” said Stephen Brobeck, a CFA senior fellow and the report’s author.  “If home buyers were allowed to negotiate their agent’s commission, agents would be encouraged to compete on price and service,” he added.

CFA’s analysis of more than 10,000 home sales this year, in 21 cities from the eastern half of the U.S., shows that buyer agent rates were highly uniform.  As the appended table shows:

The report’s analysis of these buyer agent rates and their relationship to listing agent rates reveals that the typical total commission in these cities ranged between five and six percent.  The report also explains why the most widely-quoted estimate of a national average rate – by industry-related Real Trends and now below five percent – is misleading and probably inaccurate.

In a Price-Competitive Market, Commission Rates Would Vary Considerably

In a price-competitive marketplace, rates would vary greatly because of several factors:

The report shows that the above factors, which should result in highly variable commission rates and agent compensation, are minimized by the structure and culture of the industry.

The report notes that there appears to have been some recent erosion of rates and their uniformity.  Over several decades, typical rates in urban areas have declined from six to seven percent to five to six percent (with no loss of agent incomes because of rising housing prices).  In some cities, there are now a large number of sales at both 2.5 percent and at 3.0 percent.  And in Brooklyn, where expensive homes generate substantial fees, typical buyer agent rates are well below 2.5 percent.

The report suggests that the one measure which could spur rate competition is uncoupling buyer and listing agent commissions so that buyers can negotiate compensation with their agents.  Buyer agent commissions, now baked into listed prices, would instead be negotiated by buyers.  That would lower home sale prices, and both the mortgage and real estate industries would ensure that these commissions could be included in mortgages whose amount financed would not need to increase.

The uncoupling of rates would also free listing agent discounters from the shackles of current industry rules that force them to charge typical buyer agent rates.  Over time, there would be a much wider variation in rates (and service options) reflecting agent experience, work, effort, representation, and willingness to compete on rates.

There is a broad and increasing consensus that commission rates should be uncoupled.  Studies published on both the Right (Cato Institute) and Left (Brookings Institute) argue strongly for this untying.  Lawsuits filed by major class action firms seek to uncouple commissions.  The U.S. Department of Justice is pursuing antitrust issues beyond improved disclosures.  The Biden administration’s antitrust agenda targets tied commissions.  Even some voices from the industry have suggested the consideration of changes in current rate compensation practices.

A week ago, the National Association of Realtors (NAR) announced changes that would allow agents, firms, and portals to publish buyer agent rates.  In an analysis of these changes, CFA noted that they would discourage agents from steering consumers to higher-commission properties, but would not permit significant rate competition because buyers would still not pay, or be able to effectively negotiate, compensation of their agents. 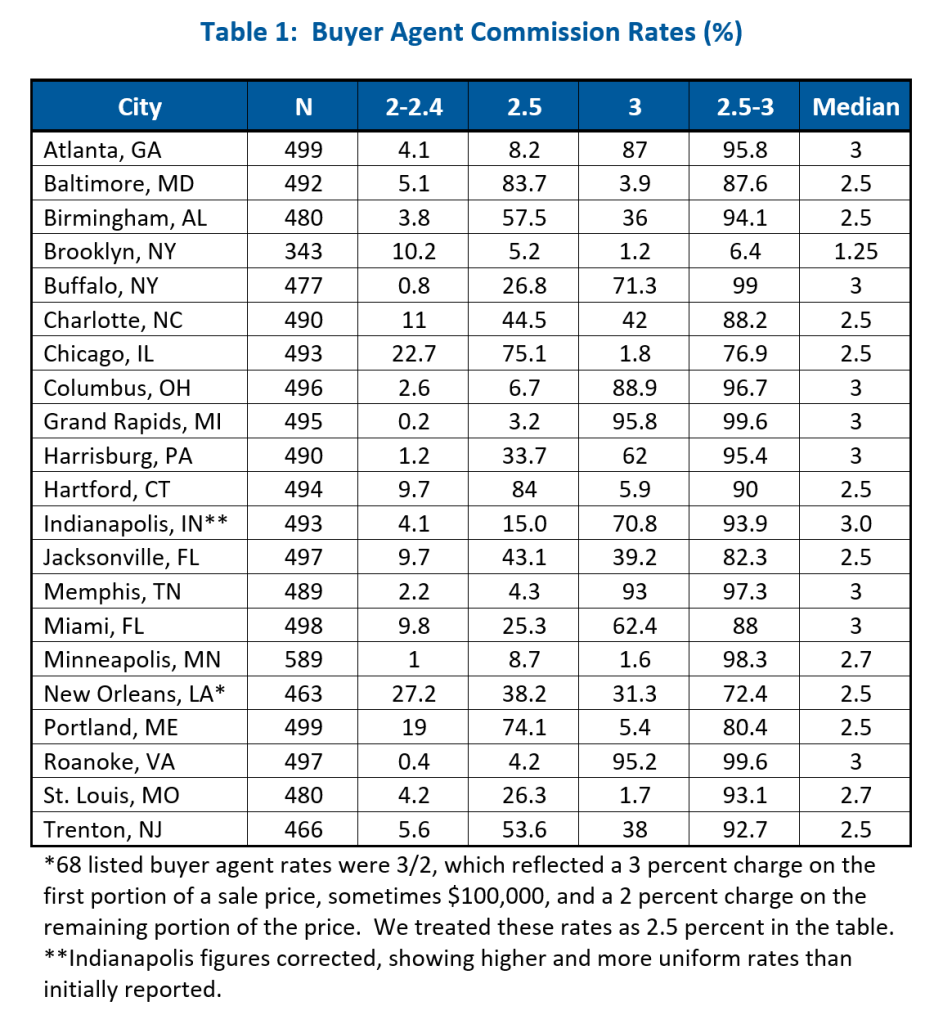