Washington, D.C. – In a study issued today, the Center for Economic Justice (CEJ) and the Consumer Federation of America (CFA) show that the typical COVID-19 auto insurance premium relief provided by insurers to date is half what it should be based on a new analysis of driving and car crashes during the pandemic. The groups’ report also shows that ongoing premium relief will be needed for June and at least several months following because of continued reduction in vehicles on the road, miles driven, and auto insurance claims.

“Because mileage and accidents have fallen by well over 50% during the pandemic, the 15% refunds most auto insurance companies have promised are not nearly enough,” said Birny Birnbaum, an economist and the Executive Director of CEJ. “Market forces alone won’t guarantee fair treatment of consumers, so insurance commissioners need to step up and provide the needed guidance and assistance to insurers to do the right thing.”

The study shows that, nationally, vehicle miles traveled (VMT) declined dramatically by the third week of March compared with the average weekly VMT in January 2020:

By the week ending April 11, every state experienced a reduction in VMT of at least 52% with several states experiencing reductions of over 80%.

The CEJ/CFA study compared changes in VMT to changes in crash data collected by two states’ Departments of Transportation – Massachusetts and Texas. These two states provide readily accessible and regularly updated crash data and offer a reasonably representative sample of the nation as a whole, the groups noted. While data for vehicle miles traveled are available through the end of April, because of a lag in the crash data, the report only covers accident reductions through April 18. As the charts below illustrate, the reductions in the number of crashes track the reductions in VMT with the number of accidents down by more than 50% in both states. 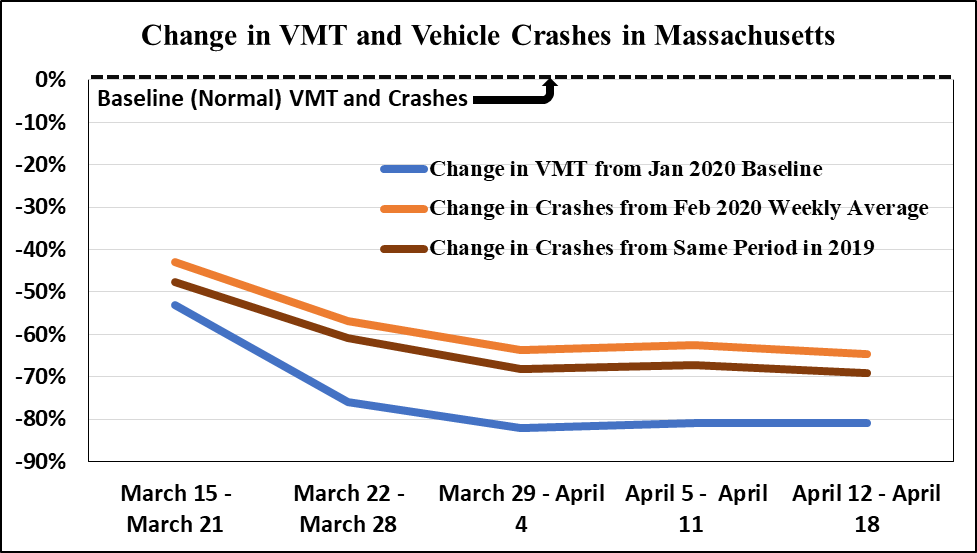 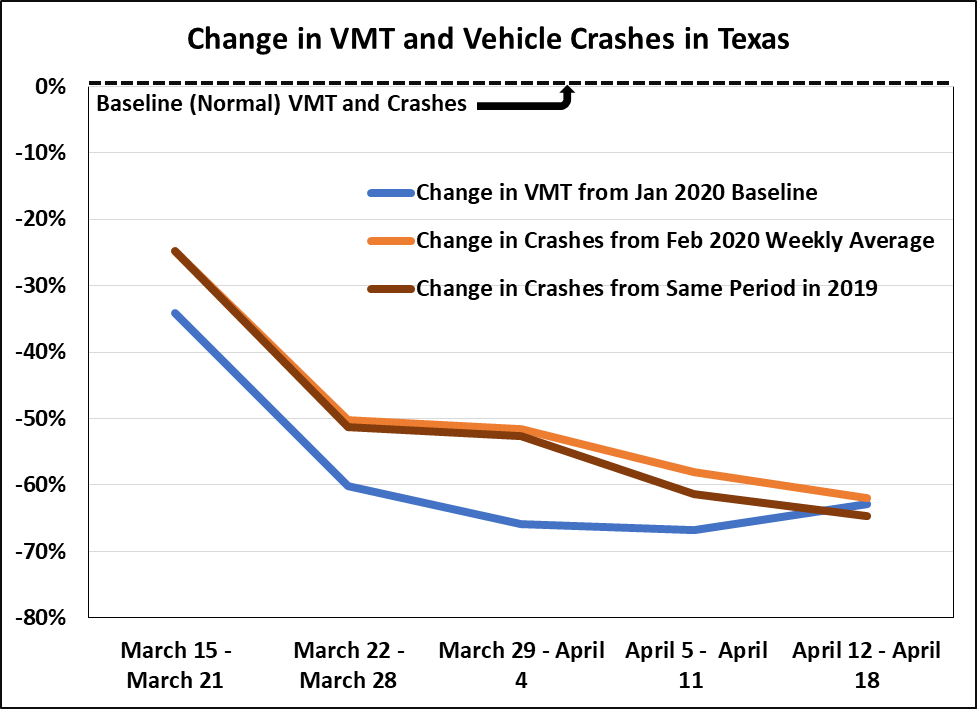 “We have no reason to believe that the drop in accidents relative to the drop in mileage that we see in these two very different states is much different anywhere else in the nation,” said CFA Insurance Director J. Robert Hunter, an actuary and the former Insurance Commissioner of Texas. “While there is variation from county to county and state to state, this phenomenon of drastically reduced driving and claims activity is significant everywhere, and the insurance industry must do a better job of accounting for it.”

The report finds that an average 30% relief payment is warranted for all premiums paid from the second half of March through April and May. CEJ and CFA used conservative assumptions about reduced levels of accidents and claims to calculate the level of premium relief due to auto insurance policyholders. The researchers also accounted for offsetting costs related to other insurer COVID-19 consumer assistance, such as extending grace periods for late payments, before determining that the typical relief promised to date is only about half what is due. In a previous study, CFA and CEJ showed that the majority of insurers were providing premium relief only for April and May and only for 15% of those months’ premiums.

“The data show most insurers should be doubling the relief they have promised consumers,” said Hunter.

In addition to the calculation of appropriate premium relief based on the new mileage and crash data, the report highlighted the lack of engagement by most state insurance regulators on the auto insurance premium relief issue to date as another important concern. California Insurance Commissioner Lara’s order for refunds, they point out, stands out as the most notable exception in this regard.

The study noted that market forces alone cannot compel insurers to provide adequate relief, and the authors set out a series of actions regulators should take to fulfill their responsibility to protect consumers from excessive auto insurance premium rates. The report also discussed strategies that state regulators and companies can take to ensure fair pricing of auto insurance over the next several months, as the nation adjusts to the post-COVID-19 economic and public health realities.  In conjunction with this report, CFA’s Hunter sent a letter to insurance commissioners amplifying these recommendations.

“Auto insurance rates now are, and for the next several months at least will be, excessive because of the ramifications of COVID-19. Insurance commissioners need to make sure companies reduce premiums so that the underlying rates yielding such premiums are no longer excessive,” said Birnbaum.