Washington, D.C.— Female drivers in Montana are facing higher auto insurance premiums than male drivers one year after state lawmakers and the Governor repealed a law that prevented auto insurance companies from using gender to determine premiums. New research by the Consumer Federation of America (CFA) found that among four major insurers tested, two insurers charge women more, one charges men more, and one has kept premiums the same regardless of gender. The price differences leave women (and sometimes men) paying as much as $230 more per year than the opposite sex for the state-required minimum auto insurance coverage, even when everything else about the two drivers is exactly the same.

In April 2021, Governor Greg Gianforte signed into law HB 379, which repealed a long-standing ban on sex-based insurance pricing in Montana. CFA criticized this bill and pointed out that in neighboring states that allowed gender-based pricing, including Idaho, North Dakota, and South Dakota, women paid more on average for auto insurance. At the time, the bill’s sponsor, Insurance Commissioner Troy Downing, claimed that “[n]ot allowing the consideration of sex in rate-making has artificially inflated insurance premiums for women, particularly in life and auto insurance.”

“Montana law requires every driver to purchase insurance, so it’s important that the pricing is fair,” said Douglas Heller, CFA’s Director of Insurance.  “It used to be that Montanans with good driving records paid the same price regardless of gender, but now women are often charged more to buy the same coverage as men. Commissioner Downing should explain why he is allowing companies to charge female drivers more than male drivers since he promised just the opposite.”

Through its testing of four insurers – GEICO, Farmers, Liberty Mutual, and Progressive,  (accounting for about 40% of the state insurance market) – CFA found that 40-year-old Montana women are now being charged higher premiums on average, but that the application of gender as a rating factor was inconsistent and contradictory. The chart below illustrates how the new gender-based pricing rule has impacted premiums in several cities in the state. 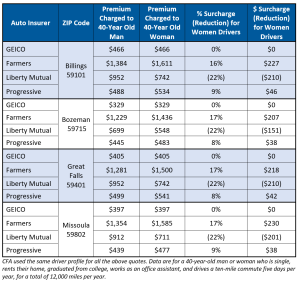 In supporting the move to sex-based pricing, Commissioner Downing said “this new law helps consumers who will now be priced more accurately according to risk.” But, as the premium quotes show, some companies think that women are higher risk, another company thinks men are higher risk, and yet another sees no need to alter rates by gender. Farmers and Progressive charge women between 8% and 17% more, while Liberty Mutual charges men 22% more, and GEICO charges men and women the same premium. Putting aside whether or not the use of gender in pricing is fair these substantial differences indicate that gender is not a reliable factor in risk-based pricing, as insurers do not agree on gender-based risk of loss.

Several other states ban gender in auto insurance pricing, resulting in fairer auto insurance markets and better outcomes for consumers, according to CFA. They include California, Hawaii, Massachusetts, Maine, Michigan, North Carolina, and Pennsylvania; the Delaware Legislature is also currently considering a ban.

“Your auto insurance premium should be based on your driving record, not whether you are a man or a woman,” said Michael DeLong, a Research and Advocacy Associate with Consumer Federation of America. “Allowing unfair discrimination based on gender was a mistake, and Montana drivers would be better served by a return to gender neutral auto insurance pricing.”