Washington, DC. – Most drivers are not offered significant price breaks for cutting down on their driving, Consumer Federation of America (CFA) reported today.  New research found that in the 11 cities tested outside of California, the nation’s largest auto insurers generally offered little or no premium reduction to low-mileage drivers compared with high-mileage drivers, even though insurance research indicates that how much you drive is among the most important factors in predicting accidents. According to the research, Progressive and Farmers usually charge the same rates to someone who drives only 2,500 miles a year as they charge someone else who drives 22,500 miles a year – nine times as far – all else being equal.  CFA noted that, in setting customers’ premiums, insurance companies often give more weight to personal characteristics such as marital status and credit score than to key risk indicators such as mileage driven annually.

“How well you drive and how much you drive should be the primary factors considered when insurance companies set premiums, but we have found that many companies either entirely ignore their customers’ actual mileage or give such a pittance for low-mileage as to have no meaningful impact on rates,” said J. Robert Hunter, CFA’s Director of Insurance and former Texas Insurance Commissioner. “For people in most parts of the country, with California as the notable exception, you’ll often pay about the same auto insurance premium whether you commute 90 miles round trip every day or if you take public transit to work and only drive on the weekends. If you drive less, you should pay less, because you can’t crash when you’re not driving.”

When insurance companies diminish the impact of mileage in their pricing methods, lower-mileage drivers are punished for reducing their risk by having to overpay for coverage, according to CFA.

For its research, CFA sought online premium quotes for basic liability coverage from Allstate, Farmers, Geico, Progressive, and State Farm for a driver with an unblemished record in which the only difference between in each quote was the number of miles driven; CFA sought five different quotes in 5,000-mile increments between 2,500 and 22,500 miles annually per company in each of the 12 cities tested. The cities tested were: Atlanta, Baltimore, Boston, Charlotte, Chicago, Cleveland, Houston, Los Angeles, Minneapolis, Oklahoma City, Rochester (NY), and Tampa. The full set of premium quotes are in the Appendix. 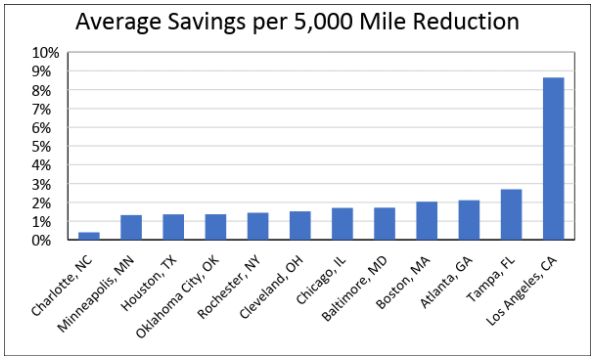 Among the twelve cities tested by CFA, only drivers in Los Angeles, California saw consistent savings for lower mileage driving, with premiums dropping by an average of 8.7% for every reduction of 5,000 miles per year and very low-mileage drivers paying 30% less than very high-mileage drivers. Under California law, auto insurers are required to give drivers’ annual mileage the second most weight when determining their premiums, with driving record being given the most weight.

Drivers in other cities see average savings of only about 1.6% for every 5,000-mile annual reduction, which amounts to less than $3 savings per month:

Even huge drops in annual mileage yield only minor premium savings in most parts of the country. CFA compared motorists who drive 2,500 miles per year with those who drove 22,500 miles per year and found surprisingly limited benefits to most drivers tested.  Only about a quarter of drivers outside of California would receive a 10% cut and in only one of 50 tests outside of California did a driver receive 20% savings or more for driving 20,000 miles less than another driver. Savings for the very low-mileage drivers were over 28% from four of five companies in California. 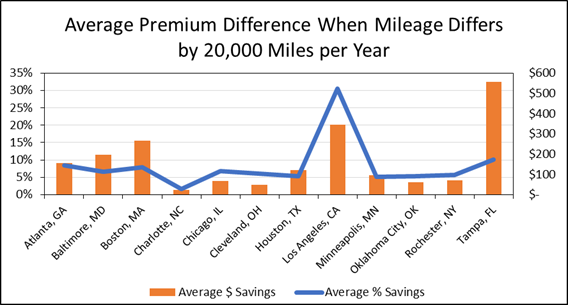 *The relatively large premium savings for low-mileage driving in Tampa – $556 per year – mainly reflects the fact that Allstate.com quotes are extremely high for all drivers (between $6,172 and $8,046 per year) and are for higher than minimum limits coverage as the company website does not provide minimum coverage quotes online.

While all five companies provide discounts for lower mileage driving in California, the companies track record in other states is much worse, as shown below:

The fact that insurers don’t give much benefit to drivers for reducing risk by reducing the miles they drive contrasts with company website statements that explain why lower-mileage drivers should see savings.  For example:

“The insurance industry knows that how many miles people drive each year is directly related to their risk of being in an accident, but companies consistently ignore this and charge drivers higher rates even when they are lower risks,” said insurance expert Douglas Heller, who conducted the analysis with CFA researcher Michelle Styczynski. “At the same time, many of these companies feel perfectly at ease charging lower-income drivers with perfect records higher rates than well-to-do customers based on factors like their job title, education level, credit score, and whether they rent or own their home.”

Because insurers are not consistently providing reasonable premium reductions for the reduced risk of driving less, policymakers and commissioners should require that companies do so.  As a matter of state law, drivers in every state except New Hampshire are required to purchase coverage from auto insurers, so there is a special obligation on state governments to ensure fairness in pricing. Whether it is a commissioner who orders a company to recraft their rating methods to increase the impact of mileage on customer premiums or lawmakers enacting legislation that increases the weight given to mileage, it is clear that state action is needed to curb industry practices, according to CFA.

“Precisely how much premiums should fall when a driver decides to carpool to work instead of always driving themselves is a reasonable actuarial exercise but charging the same amount to a 5,000-mile driver and a 20,000-mile driver is undeniably unfair,” said CFA’s Hunter.  “Since insurers won’t give low-risk drivers a break, consumer protection rules should require it.”

Some insurers, including Progressive, argue that companies don’t emphasize mileage when setting rates “because drivers commonly overestimate and underestimate how much they drive.” But there are several ways by which insurers confirm the accuracy of mileage estimates, including recording odometer readings at the times of policy purchase, policy renewal, and accident claims.  These readings can be taken not only by company agents but also by third parties such as auto repair shops and other data suppliers.  In fact, CARFAX maintains a database on the odometer readings of tens of millions of vehicles, which is based on information from more than 90,000 sources – dealerships, departments of motor vehicles, police and fire departments, rental car companies, and auto repair shops, that insurers use to collect data on their customers.  Those states requiring periodic safety and/or emission inspections represent an especially useful source of odometer readings.  All these sources can be used to check and, if necessary, correct driver mileage estimates.