Washington, D.C. – New research published by Consumer Federation of America (CFA) today reveals that the nation’s largest auto insurance companies usually charge more for auto insurance to shoppers who currently have a minimum limits liability policy than companies charge to those who have previously purchased higher limits insurance. Insurance experts who reviewed premium quotes from six companies in several cities call the practice an unjust and actuarially unsound penalty on the poor.

According to the data, insurance shoppers whose current auto policy covers up to $300,000 in bodily injury liability were offered that same $300,000 coverage for $1,849.57 per year on average in five communities across the nation. Shoppers whose current insurance only provides their state’s mandated minimum liability coverage were quoted an average annual premium of $2,103.33 for the $300,000 policy. That equals a $253.76, or 14%, surcharge for drivers solely because of their prior level of coverage.

“Auto insurance is not just mandatory in most states, it is an important asset protection tool,” said J. Robert Hunter, CFA’ Director of Insurance and the former Insurance Commissioner for Texas. “As folks’ financial situations improve and they opt to buy more coverage, they should expect equal access to the products and services available to others. Pricing auto insurance based on drivers’ prior purchases is both actuarially unwarranted and an entirely unfair tax for being poor.”

For each city and company, CFA asked for two quotes for a policy offering extended liability coverage (“100/300,” which covers up to $100,000 for injury-related losses for each person injured by the driver and up to $300,000 for all injuries stemming from an at-fault accident).

The first quote was for a driver who currently has a 100/300 policy and the second quote was for someone who currently is covered by a policy that provides only the state’s minimally required liability coverage (for example, 25/50 in Denver) but who wants to increase insurance coverage to a more protective 100/300 policy. Other than the different prior coverage, the drivers tested were exactly the same within each city – same car, same address, same commute, and both had a perfect driving record for every test. The list of rating-related characteristics for drivers in each city are listed along with all the premium quotes at the end of this report.

As Figure 1 shows, drivers with lower prior limits pay significantly more in all cities tested except for Simi Valley. Under California’s insurance consumer protection law known as Proposition 103, insurance companies are prohibited from considering a driver’s prior insurance coverage when setting rates and premiums. 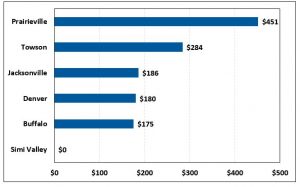 Geico and Farmers imposed the most severe penalty – 22% – on drivers attempting to increase their coverage, but all carriers tested increased rates by double digit percentages. Figure 2 below shows the average percentage increase in rates by each company. The chart excludes the data from California, because companies are required to provide the same rate to good drivers irrespective of their prior coverage limits. 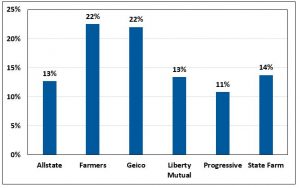 “Most agents and brokers will recommend that customers with any assets to protect buy more liability coverage than the mandatory minimum set by the state, and those who buy only the minimum coverage are more likely to be asset poor and lower-income,” said CFA’s insurance expert Douglas Heller. “But one’s poverty, as indicated by prior coverage, should never be used as a basis for higher premiums or as a barrier to better coverage. In fact, no state allows use of income to rate risks, and this is an unfair surrogate for income.”

Higher rates were not the only punishment imposed on lower-income drivers. Farmers Insurance, in one instance, did not provide a quote for the shopper with basic limits even though it offered a quote to the shopper who had more robust coverage. In another instance, it shifted the lower limits customer to its non-standard market affiliate.

Regulators Should End This Discriminatory and Predatory Practice at Once.  If Not Removed, State Lawmakers Should Enact a Ban

State Insurance Commissioners should call for an immediate cessation of the practice of using prior insurance coverage levels as a factor in premium setting, CFA said. Under virtually all states’ insurance laws, “unfair discrimination” is illegal. Charging different premiums for similar risks (same driving safety record, same number of miles driven, same car, et cetera) is the definition of unfair discrimination in the insurance context.   Further, use of income-related classes is illegal in all states.  Here, we clearly have such a class that should be eliminated, according to CFA.

In a letter sent to all State Insurance Commissioners last Friday, CFA called on Commissioners to immediately issue a bulletin apprising insurers that this practice is illegal and any rate plan or practice that differentiates between customers based on prior coverage level must be replaced with a new plan that does not discriminate in this manner. That letter is available here.

If Commissioners refuse to take action, CFA will recommend that lawmakers order the Commissioner to do so by enacting a model Fair Premiums Act with the following language.

A person or company selling auto insurance must not consider or use the amount or level of prior auto insurance coverage to underwrite or rate a driver, whether as new or renewal business.

“States require every driver to purchase auto insurance, so regulators and lawmakers have a special obligation to ensure that prices are fair. This is  especially important for lower- and moderate-income people for whom the cost of auto insurance coverage is a significant portion of their family budget,” said Hunter.