Washington, D.C. – Major auto insurance companies charge good drivers as much as 47 percent more for basic liability auto insurance if they don’t own their home, according to a new analysis of premiums by the nonprofit Consumer Federation of America (CFA).  Based on a sampling of insurance quotes across the country for a 30-year old safe driver, CFA found that premiums averaged seven percent higher – about $112 per year – for drivers who rent instead of own homes. Liberty Mutual penalized renters the most with premium hikes averaging $307 per year, or 19 percent more, for state mandated auto insurance coverage.

Auto insurance companies’ use of homeownership status in pricing disadvantages low- and moderate-income Americans, according to CFA.  Federal Reserve Board data show that the median income of renters in the U.S. was $27,800 in 2013 compared with $63,400 for homeowners.

“To raise people’s auto insurance premium because they can’t afford to buy their homes unfairly discriminates against lower-income drivers,” said J. Robert Hunter, CFA’s Insurance Director and the former Insurance Commissioner of Texas. “A good driver is a good driver whether she rents or owns her home.  Insurance companies should not be allowed to target people based on homeownership status.”

For the analysis, CFA tested rates for minimum limits liability coverage in 10 cities from the nation’s largest insurers – State Farm, Geico, Allstate, Progressive, Farmers, Liberty Mutual, and Nationwide.  CFA used company websites to solicit two premiums in each city for a 30-year old female motorist who has a 2005 Honda Civic and a perfect driving record.  The only characteristic that was altered during the testing was whether she owned or rented her home.  (A complete list of driver characteristics is included in Appendix One.)

Geico was the only company tested that did not consider homeownership status in any of the 10 cities.  The only premium decrease for renters was found in Chicago, where Allstate lowered rates by 11 percent compared with premiums for homeowners.

Below are tables showing the annual premium changes in total dollars and percentage by company in each of the 10 cities.  The complete set of premium quotes is included in Appendix Two. 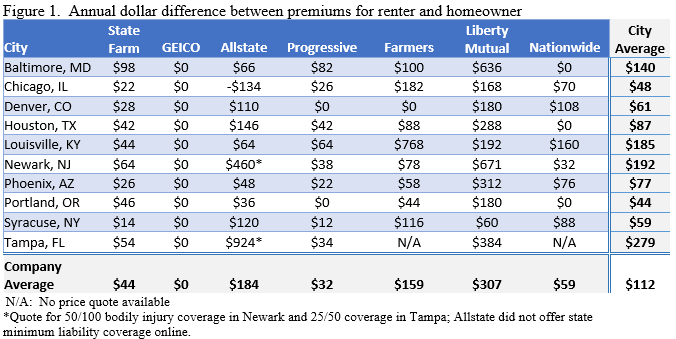 No change in premiums for drivers in California

In addition to the 10 cities included in the survey, CFA tested rates in Oakland, California and found that all companies charged the same premium to a good driver whether she owned or rented her home.  Consumer protection laws in California, prohibit auto insurance companies from considering customers’ homeownership status or other socio-economic factors such as level of education or credit score when setting premiums.  Instead, companies must prioritize driving safety record, annual mileage, and years driving experience when setting customers’ premiums.

Over the past three years, CFA has tested numerous factors unrelated to driving that impact auto insurance premiums.  The studies have found that, as with homeownership, auto insurance companies use other surrogates for income to raise rates on low- and moderate-income Americans.  CFA studies have shown that good drivers with lower credit scores pay higher premiums, as do blue collar workers, drivers without college degrees, and unmarried drivers. CFA also found that drivers living in predominantly African American communities pay substantially higher premiums than those living in largely white communities. CFA’s prior research can be reviewed and downloaded at: http://bit.ly/AutoInsuranceResearch

“Using customers’ homeownership status to determine premiums is another way in which insurance companies are piling on lower-income Americans,” said Douglas Heller, a consumer advocate who worked with CFA’s Michelle Styczynski to analyze the data in the study released today.  “With all these different rating factors that have nothing to do with driving, auto insurers are charging good drivers hundreds and sometimes even thousands of dollars extra just for being poor.”

In conjunction with the release of this new analysis, CFA is calling on Insurance Commissioners and lawmakers around the country to prohibit insurance companies from penalizing good drivers based on their status as renters.  According to CFA, homeownership status is a method by which insurance companies assess customers’ income rather than driving risk and should not be used as a factor in determining premiums.

“Virtually every state requires drivers to buy insurance, but we shouldn’t force them to buy a home in order to get the best price.  State Insurance Commissioners and elected representatives should step in and stop this practice,” said Hunter.

CFA is a nonprofit association of more than 250 consumer groups that was established in 1968 to advance the consumer interest through research, advocacy, and education. 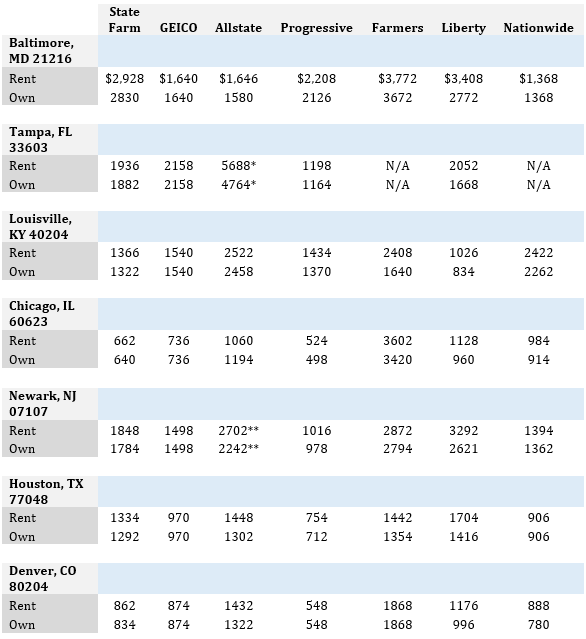 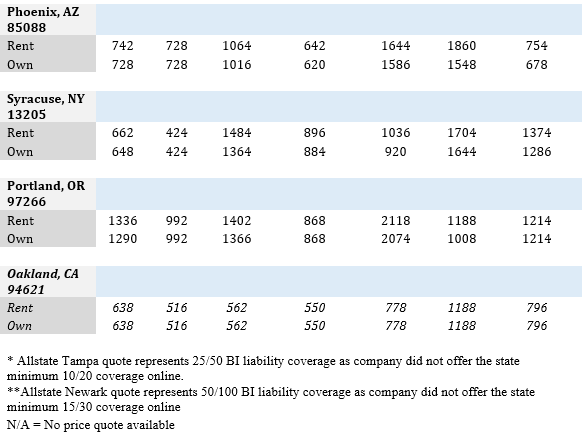