Washington, D.C. – Today, the Consumer Federation of America (CFA) and National Consumer Law Center (NCLC) called on the U.S. Department of Energy (DOE) to immediately abandon its proposal to roll back the lighting efficiency standards adopted in January 2017 that would apply, starting January 1, 2020, to a wide range of bulbs not previously covered by any standards.

In comments submitted to DOE, the two groups indicated that the Trump Administration’s rollback of the requirements for numerous light bulb types, such as three-way, globe shaped and various decorative lights, would cost consumers $14 billion dollars cumulatively or $115 annually per household by 2025.  They stated that meeting the “General Service Lighting” (GSL) standard of 45 lumens per watt for these types of bulbs, by January 1, 2020 is critically important because lighting comprises about 10% of a household’s electricity bill.

The experience with light bulbs already covered by standards demonstrates that the market can successfully transition to more efficient “light emitting diode” (LED) bulbs. This is exactly what occurred with common A-type, pear shaped household light bulbs, thanks to standards that went into effect in 2012. Those standards will save consumers almost $8 billion in energy costs by 2025. As manufacturers invested in the highly efficient light emitting diode (LEDs) bulbs, prices decreased by almost 90% from 2012 to 2016.[1] According to research conducted by CFA, common A-type LED light bulbs are now only 75 cents to a dollar more than an inefficient halogen incandescent bulbs.  Because these LED lights are 80% more efficient, this cost difference is recouped in less than a year (see figure below). In the case of the three-way bulbs that aren’t currently covered by the GSL standards, the purchase price of the more efficient LED ($7.98) is twice as much as the inefficient incandescent bulb ($3.98) and may be a disincentive to buying an LED regardless of the substantial energy savings. Even with the price difference, the LED is 85% cheaper over a 10 year period and would save a consumer almost $100 compared to an incandescent bulb, and the difference in price is recouped in less than a year.  It would stand to reason that, as seen with the A-type bulbs, the purchase price will come down.

“The light bulb standards adopted by DOE in 2017 are particularly important for low-income households and should not be rolled back by the agency.  If a low-income renter moves into an apartment where much less efficient bulbs were installed, that tenant will be needlessly saddled with higher, less affordable electric bills,” said Charlie Harak, managing energy attorney at the National Consumer Law Center.

There is also widespread consumer support for the light bulb standards. A recent CFA survey found almost three-quarters (71%) of respondents support federal efficiency standards for light bulbs, compared to only 29% opposing standards.[2] Only slightly less (64%) supported covering the additional types of bulbs, starting January 1, 2020, such as: three-way light bulbs, reflector bulbs used in recessed cans and track lighting, round globe light bulbs, and other decorative lights. Not surprisingly, consumers who have had experience with LEDs are much likelier to support efficiency standards compared to those who have no experience. 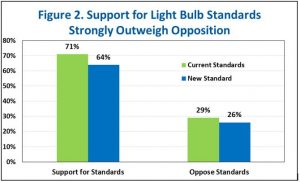 “The bottom line: consumers support light bulb efficiency standards because they save money. Consumers will be robbed of greater energy cost savings if DOE rolls back the lighting rules adopted in January 2017 that include additional types of light bulbs. It is critical that the Administration supports cost-effective energy efficiency measures. Energy saved whether in the residential, commercial or industrial sectors benefits consumers and our economy. DOE’s ill-conceived proposal to rollback the GSL lighting standard should be withdrawn,” said Hall-Crawford.

The CFA and NCLC comments can be found here.

[1] According to the Department of Energy’s Adoption of Light-Emitting Diodes in Common Lighting Applications report, July 2017. https://www.energy.gov/sites/prod/files/2017/08/f35/led-adoption-jul2017_0.pdf

[2] The survey was conducted for CFA by Engine International by cell phone and landline on March 21-24, 2019, using a representative sample of 1007 adult Americans. The survey’s margin of error is plus or minus 3.09 percentage points at the 95% confidence level.