Washington, D.C. – A new national opinion survey released today by the Consumer Federation of America (CFA) reveals that 71 percent of Americans “support the idea that the government should set and update energy efficiency standards for appliances.”[1]  In spite of this widespread support, the U.S. Department of Energy (DOE) is delaying improvement of appliance efficiency standards and at the same time working to weaken those currently in place.

Even though consumers are willing to pay more upfront for energy savings as appliance efficiency has increased, overall retail prices for major appliances, such as refrigerators, dishwashers, clothes washers and dryers, have actually declined in seven of the past ten years, according to one estimate based on an analysis of government data.

For example: As a result of federal standards, refrigerators now consume just one-quarter of the energy compared to refrigerators in 1973.  Yet, during this period, real prices of refrigerators declined by 50 percent even though these appliances grew larger and added features such as automatic defrosting and built-in ice-makers. See figure below. 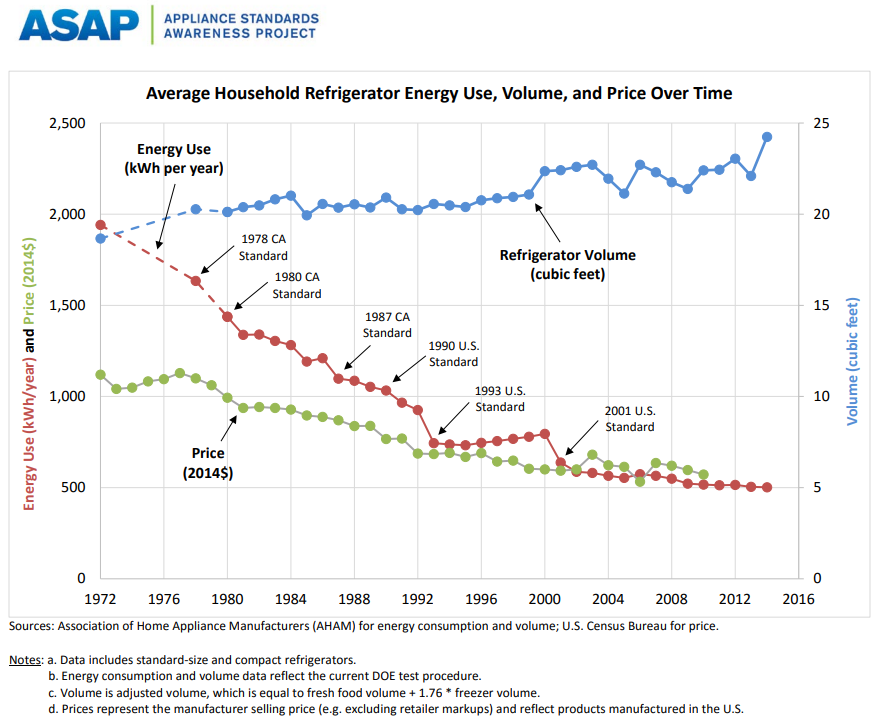 Despite greater appliance efficiency, lower appliance prices and strong public support, the Trump administration is working to undermine these sensible, cost-effective efficiency standards.  The Department of Energy has repeatedly missed statutory deadlines to consider updating standards for household appliances such as: refrigerators and freezers, clothes washers, clothes dryers, and room air-conditioners, and is working on weakening standards for lighting products.

Regardless, CFA encourages consumers to take action on their own to be more energy efficient and save money on their energy bills.  For tips on steps you can take, go here.

The survey data are available for inspection by the press.

[1] The survey was conducted for CFA by ORC International, which interviewed by landline or cell phone 1,003 representative Americans on March 8-11, 2018.  The survey’s margin of error was plus or minus three percentage points.