Washington, DC. – Berkshire Hathaway subsidiary Geico adds a surcharge to the auto insurance premiums of soldiers who dropped their coverage while they served abroad, according to a televised report by investigative reporter Lee Zurik. Consumer Federation of America (CFA), which has verified this “patriot penalty” through its own research called on the nation’s insurance commissioners to intervene, in a letter it sent today.

“It is absolutely outrageous and unacceptable to allow any insurer to charge a higher premium to member of the military solely because they didn’t maintain insurance coverage when they were sent abroad to serve,” CFA’s insurance expert Douglas Heller wrote in the letter to insurance commissioners. “This penalty for service is revolting and should be barred with without delay.”

According to the news report, the surcharge on returning soldiers can be as high as $500 every six months, even if the servicemember has a clean driving record. A preliminary review of Geico’s practices indicates that it appears to have a Patriot Penalty in at least the following states, though further research may provide evidence of the charge in other states as well:

In its letter, CFA wrote that if a commissioner determines that they are not authorized by state law to intervene and block this penalty, then state lawmakers should take up legislation immediately. Some states, including California and Florida, explicitly prohibit insurers from imposing this kind of surcharge on safe drivers.

CFA notes that Geico is well aware of the status of these drivers it penalizes, because it specifically asks customers if they had a break in coverage due to deployment (see screenshot). The practice of charging safe drivers higher rates if they had a lapse in coverage is, itself, an unfair barrier used by many insurance companies that keeps financially stressed drivers uninsured, but the use of this pricing scheme on people who were away from their cars for an extended deployment is uniquely offensive, said CFA. 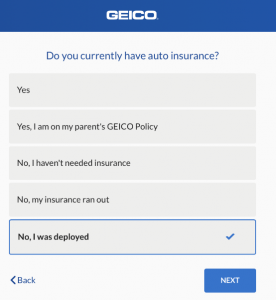 According to the televised report, Geico refused to answer questions about its Patriot Penalty or defend the practice. That evasion, however, should not be tolerated by state insurance regulators.

“Geico talks to the public through its deceptive advertising and refuses to answer reporters’ questions,” said Heller. “But it cannot ignore the Departments of Insurance that approve Geico’s license to do business in each state. Insurance Commissioners and lawmakers need to immediately stand up to Geico on behalf of America’s soldiers.”