Washington, D.C. – Many good drivers in ten American cities tested by Consumer Federation of America (CFA) are paying far too much for auto insurance simply because of their home ZIP code, the organization reported today. CFA’s research points to significant premium differences in each region among neighbors living within 100 yards of each other in adjacent ZIP codes, sometimes as close as across the street or even next door. In each city tested, the higher-priced ZIP code had a lower median income and a higher percentage of non-white residents than the neighboring, lower-premium ZIP code.

As an example of the research findings, Figure 1 shows two houses on either side of a Buffalo ZIP code boundary and the average premiums offered to a good driver at each address from five major auto insurers. Except for the address, the tested drivers were exactly the same in every way, and the coverage is for the state mandated minimum liability policy. The good driver in the lower-income, predominantly African American 14215 ZIP code was quoted 34% higher premiums on average than her counterpart next door, in the wealthier, majority white 14226 ZIP.

CFA noted that these price hikes on lower-income drivers based on their residence are part of a larger problem in which auto insurers use a host of socio-economic factors, including job title, level of education, and homeownership status, to impose higher premiums for mandatory auto insurance on those least able to afford it. “When we look at the many ways in which lower- and moderate-income Americans are targeted with higher prices for the same product as their higher-income neighbors, we have to rethink the state enforced rules governing the pricing of state-mandated auto insurance,” said CFA’s Director of Insurance Bob Hunter.

Figure 2 provides the simple averages of ZIP median income, white residents as a percentage of ZIP population, and ZIP premiums for all ten cities in aggregate. The neighbors who live in ZIP codes that are 60% less white and have half the income pay about 23% more for auto insurance even if they have perfect driving records.

CFA’s insurance experts said that drastic price hikes for adjacent ZIP codes are indefensible and that state regulators need to do a better job reviewing insurance company rating plans to ensure that any premium differences tied to ZIP codes are fair and reasonable. In a letter sent to the nation’s Insurance Commissioners today, CFA argued that its alarming findings about ZIP code boundary price spikes in ten cities should lead every state’s Department of Insurance to investigate insurers’ use of ZIPs and craft rules to eliminate sharp increases along contiguous community borders.  CFA wrote:

Insurance companies are not supposed to treat similar risks differently, and there is no way that two people who can talk to each other from their yards can be considered different risks based on geography. Since states require drivers to purchase private auto insurance, the companies and government regulators have a special obligation to ensure fairness in pricing.

Even if, as regulators, you remain open to the idea of highly differentiated premiums that include ZIP code by ZIP code rating, there is no justification for stark price differences along these unnatural borders. Instead, you should insist that companies smooth their rates across similarly structured geographies so as to avoid this type of ZIP code discrimination faced by residents of lower-income, majority-minority communities.

The letter is available here.

As Figure 3 illustrates, in CFA’s testing, the higher premiums were always found in the lower income, less white side of the adjacent ZIP codes. CFA noted that the unfair ZIP code pricing impacted middle class neighborhoods as well, including communities tested in Austin and Trenton in which the “lower-income” ZIP still had a higher median income than the city itself.  In every test, though, the higher priced ZIP code had a lower median household income and higher percentage of non-white residents. The entire set of quotes gathered by CFA is available at the end of this release. 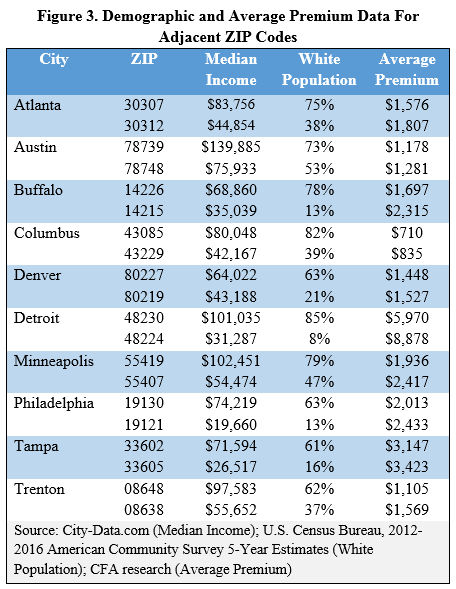 “While actuaries might argue about how much of a risk difference exists when cars are primarily driven in a densely packed city compared with a sparsely populated rural town, there is no basis for charging 20% or 50% more to drivers who live across the street from each other,” said CFA’s Hunter. “When companies propose rating plans that create stark pricing differences for adjacent ZIP codes, regulators need to step in and block those plans, because they make no sense and are unfair.”

CFA notes that there is not unanimity among the companies when it comes to how much riskier a neighboring ZIP code is compared with another. As Figure 4 illustrates, the range of increases – and even some decreases – imposed as drivers move from a higher- to a lower-income adjacent ZIP code is quite large: on average 54 percentage points between the lowest change to the highest change. In all cities except Detroit, where only two companies would provide online quotes, at least one company charged the same or slightly lower premiums to a driver in the poorer ZIP code.

In Minneapolis, for example, four companies that provided quotes charged, on average, $602 more to drivers in the lower-income ZIP, but Liberty Mutual charged the same premium in both ZIPs. In Atlanta, Allstate charged two percent less in the lower-income ZIP, while other companies charged, on average, 26 percent more in the poorer ZIP. According to CFA, this illustrates that wildly different premiums from one house to the next are not necessary or actuarially commanded, but, instead, are likely driven by marketing decisions of insurers. 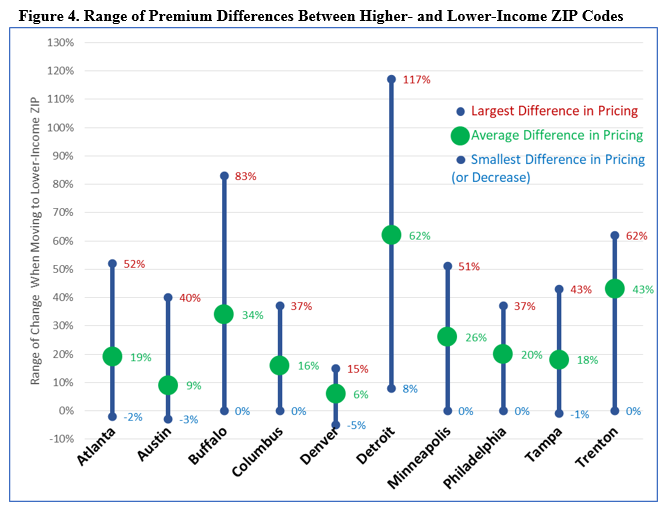 “Insurance companies once drew red lines around communities they didn’t want to serve.  Now they overprice them,” said Douglas Heller, an insurance expert for CFA who conducted the research with CFA’s Michelle Styczynski. “The fact that not all companies always tow this discriminatory line just highlights the fact that the practice of jacking up rates on someone for living on the wrong side of the street is arbitrary and unfair.”

The following links show a picture of the two addresses tested in each city and the average premium difference for a good driver on either side of the ZIP code boundary. An appendix with all the premium quotes used in this research is available here.

[1] State Farm’s website did not allow our researchers to retrieve sufficient information to be included in this report.