For every recall issued, the Consumer Product Safety Commission (CPSC) estimates the number of impacted vehicles, the reason for the recall, and the number of deaths and injuries if any.

CFA also analyzed the brands of the recalled vehicles. Polaris had the most recalls of the 110 we have analyzed, 40 recalls; over triple that of the brand with the second most recalls. Kawasaki and BRP/Can-Am had the second and third highest number of recalls, 12 and 9 respectively. “It is imperative that the CPSC investigate why so many recalls are caused by fire risks and work with manufacturers to prevent these risks before these vehicles enter the market,” stated Rachel Weintraub, legislative director and general counsel with Consumer Federation of America.

In 2019, CFA documented five unilateral recalls that were issued exclusively by the manufacturer, in these cases, Polaris. These “Stop Sale/Stop Ride Notices” were not issued as voluntary corrective actions with the CPSC and the CPSC did not issue a press release to communicate the action to the public. “We are concerned about these unilateral actions and hope that this will not become a trend,” stated Rachel Weintraub. “Enforcement actions should involve the CPSC and should be deemed recalls so that consumers know what they are and find out about them,” Weintraub said.

By tracking news reports and analyzing National Highway Traffic Safety Administration (NHTSA) data, CFA’s OHV Safety Coalition documents OHV deaths. Between January 1, 2013 and February 3, 2020, CFA and its partners have documented over 4,100 deaths involving OHVs (4,102 total). Of these, 720 involved children age 16 or younger (17.55%). Unfortunately, these numbers may continue to rise as we gather more data and as government data is released.

CFA’s OHV Safety Coalition’s analysis of OHV deaths includes detailed breakdowns of fatalities, tracking data such as: vehicle type, fatality location, age of the deceased, gender of the deceased, and whether the fatality occurred on-, or off-road. 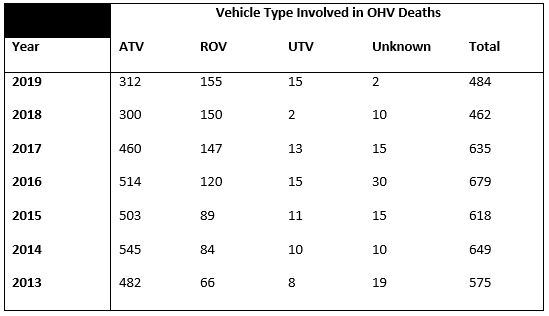 “The data collected by CFA’s OHV Safety Coalition identifies that in 2019, more deaths were caused by ROVs than in any other year,” stated Rachel Weintraub. “The CPSC does not issue annual death and injury data associated with ROVs, but they should. This data is critical to understanding the impact of ROVs on public health and safety.”