Every year when we survey state and local consumer agencies about the complaints they receive, some things come up time after time, but there are always new twists. For instance, auto sales and service usually top the list of most common complaints, but this year’s complaint survey was the first time that I had heard about brokers that advertise online that they will find the car you’re looking for. In the complaint described in our report, the broker notified the consumer that a car at an auction matched his needs. The consumer agreed to have him buy it, but when the car was delivered, it didn’t have some of the features that he wanted. Later he discovered that there were some mechanical problems, too. But by then he’d paid the broker, who refused to return his money. To make things even more complicated, the broker used another auto dealer’s license to make the purchase at the auction, so it was unclear who the “seller” was, plus since the consumer’s transaction with the broker was in a neighboring state, the used car protections provided by his state’s law did not apply.

Lesson #1: It’s risky to buy a used car or anything else that’s expensive and where condition really matters without seeing it in person and knowing what your rights are if there’s a problem.

Something else that was new to me was title pawns. They’re similar to title loans, where the title to your car is held as collateral in case you don’t make your payments, but the laws covering loans may not be the same as for pawns. The bottom line is the same, though: you could lose your car if you don’t pay up.

Lesson #2: Payday loans, title loans and title pawns cost a lot more than traditional loans and could leave you deeper in the hole than you were before. Saving even small amounts regularly to buy the things you need and cover unexpected expenses is a much smarter way to go.

A case against a company that was peddling alarm systems door-to-door raised a new issue – salespeople using handheld devices to record the contracts. Consumers weren’t given a chance to scroll through the agreements to make sure they were correct, and some of them didn’t even have email or computers, so they had no way to receive copies of the contracts electronically.

Lesson #3: Always read the contract carefully, ask questions about anything that doesn’t seem right before signing, and insist on getting a copy of the agreement then and there.

Then there was the complaint from a couple who, while on a cruise, visited a jewelry store at a port of call, where they were treated to multiple tropical drinks. Thoroughly intoxicated and under pressure to return to the boat before it set sail, they bought a ring for $16,400. They were assured that if they didn’t like the ring they could return it at their next stop, where the business had another store. The next day, under the light of sobriety, they realized the ring was of poor quality and when they got to the next stop they went to the store to ask for a refund. The store refused, citing a restrictive return policy that had not been disclosed to them. Since the transaction had occurred in a foreign country, which did not have a law concerning returns, there was nothing that could be done to help them.

Lesson #4: It’s a mistake to assume that you can cancel a purchase and get your money back. While you have a 3-day cancellation right for door-to-door sales over $25, when you buy something in a store you’re generally bound by its return policy. If you don’t see that information in the check-out area, ask about it. Some states specifically require the return policy to be clearly disclosed before the sale.

There were also some new twists in fraud in this year’s survey.  We’ve heard a lot in the past few years about imposter scams in which consumers get a call or email from someone pretending to be from the sheriff’s office or another law enforcement agency threatening them with arrest for missing jury duty and insisting that they send money immediately to resolve the problem. One consumer agency said that people who were awaiting trial on criminal charges were now getting the same kinds of bogus threats. Another agency reported that a consumer was contacted by someone claiming that he had money coming to him as the result of a court case. He was asked for his credit card account information in order for the money to be credited to it. Sure enough, he received a credit for $4,262, whereupon he wired $1,500 as instructed to pay for “legal costs.” As soon as the scammers got the cash, they took back the money that had been credited to his credit card, leaving him wiser but $1,500 poorer.

Lesson #5: If someone contacts you unexpectedly about money you owe or money that’s supposedly coming to you, it’s probably a scam. Tell them to send you the information in writing and check with your state or local consumer agency. Demands that you send payment for anything using a money transfer service, gift cards or prepaid cards are clear danger signs of fraud.

There are many other examples of scams and abuses in our survey report, along with tips for how to avoid these problems and what to do if you need help. Here you’ll find the report, blogs from some of the consumer agencies that participated in the survey, and infographics that highlight important things for consumers to know. 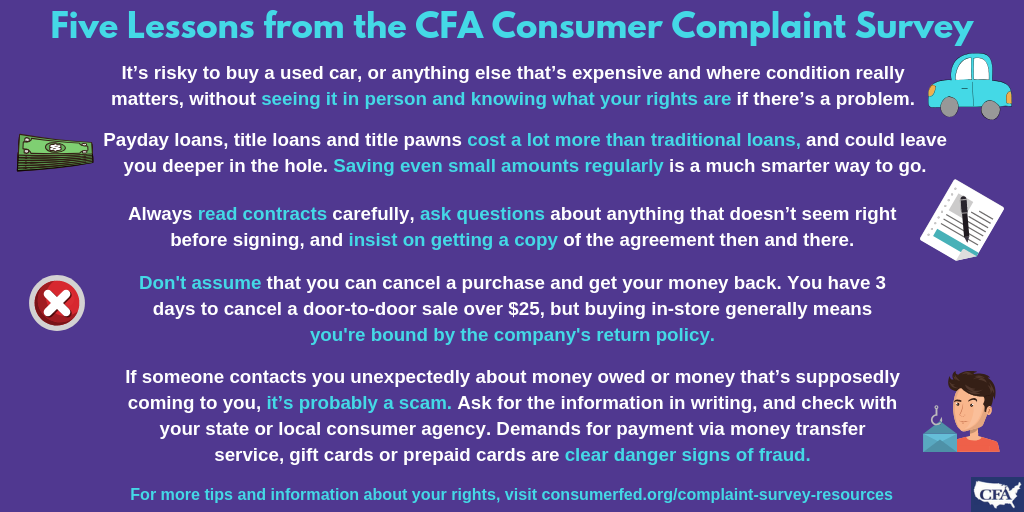