When a scammer calls a potential victim, only one person on the phone is a pro.

For scammers, posing as someone else and weaving a believable story is business as usual. It’s only the victims who get caught off guard by a seeming crisis that only a fast payment can fix.

People across the country have reported losing money to scammers who:

People who lose money to these types of impostor scams often tell us they were truly terrified by threats they were about to be arrested or have their bank accounts seized.

Grandmas and grandpas tell us they were worried sick that their grandchild was in a jail cell, injured and alone, after hearing a sobbing voice on the phone.

Scams are designed to make you upset. That way, you won’t pay attention to the odd things about the call. Many scam victims tell us they recognized red flags only after they paid, when the panic subsided.

If a call makes you feel scared or worried, hang up. Check in with a family member or friend. Text your grandchild. Call your local police or a local or state consumer protection agency. You are surrounded by people who – because they aren’t caught up in the call – can help you clearly evaluate the situation.

Here’s another thing you should know. Scammers want you to pay in a way that’s hard for police to trace. Right now, that means they’re asking victims to pay with money wires or store gift cards (Amazon and Home Depot are a couple current scammer favorites).

No government agency accepts either form of payment.

You can’t pay bail or your utility bills with an iTunes card.

Reduce your chances of being scammed by refusing to answer calls from numbers you don’t know. And if you pick up by accident, hang up before you get caught in a scammer’s spell.

If you’d like to learn more about how to protect yourself or your family from current scams, call your local consumer protection agency. 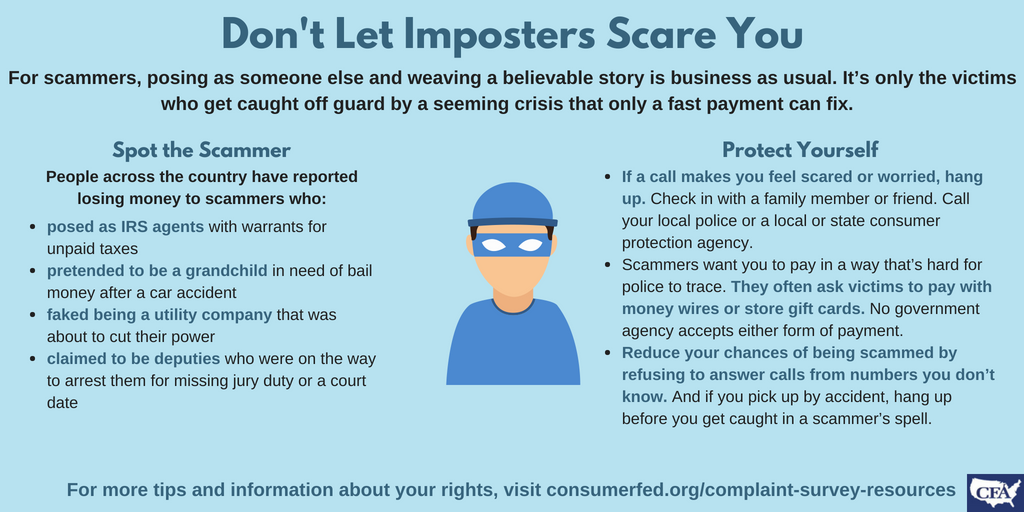