Amendments to American antitrust laws are rare, but important, because they endeavor to close loopholes, or extend oversight to new forms of economic activity.  Understanding the causes of the rise and fall of neoliberalism in the past 40 years (1980-2020) is an important and much-studied step in understanding why we need a new political economy for the 21st century.  This analysis by the Consumer Federation of America addresses an equal – and perhaps more – important question: What political economy should replace neoliberalism in the next 40 (or more) years?

Earlier, we called on Congress to take steps to end practices that block entry by independent application developers, lower consumer prices, increase consumer choice, and stimulate innovation.[1]  We based this call on an extensive analysis of the terrain of competition policy that we described in four lengthy historical papers.[2]

Based on that broad, general research, this analysis examines S. 2992, The American Innovation and Choice Online Act.  We conclude that it is a vital step toward promoting competition in the digital communications sector.  We see it as an important, cautious law to revitalize competition policy in general and antitrust in particular, after a long period of lax enforcement that put the nation’s competition laws into a “deep freeze.”

Overview of the Analysis

This analysis focuses on six lessons that are extremely important for the current debate.

The earlier analysis draws a direct link between Louis Brandeis, a leading and highly influential advocate in the formative years of pragmatic, progressive capitalism, and Joseph Stiglitz, a contemporary advocate of that approach to political economy.  It argues that the remarkably successful, uniquely American approach should be the model for the future.  The struggle to implement this model in the four decades before the Depression (1890-1930) is linked to the success of the economy during the “Golden Age of Capitalism” (1948-1972).  The Neo-Brandeisian approach to antitrust plays a key role and is very much the approach needed to revitalize competition policy at present.  Our analysis turned to the challenges of the digital economy by reviewing a number of academic studies and the ongoing activities of antitrust practitioners.  Table 1 summarizes the findings of that earlier analysis. 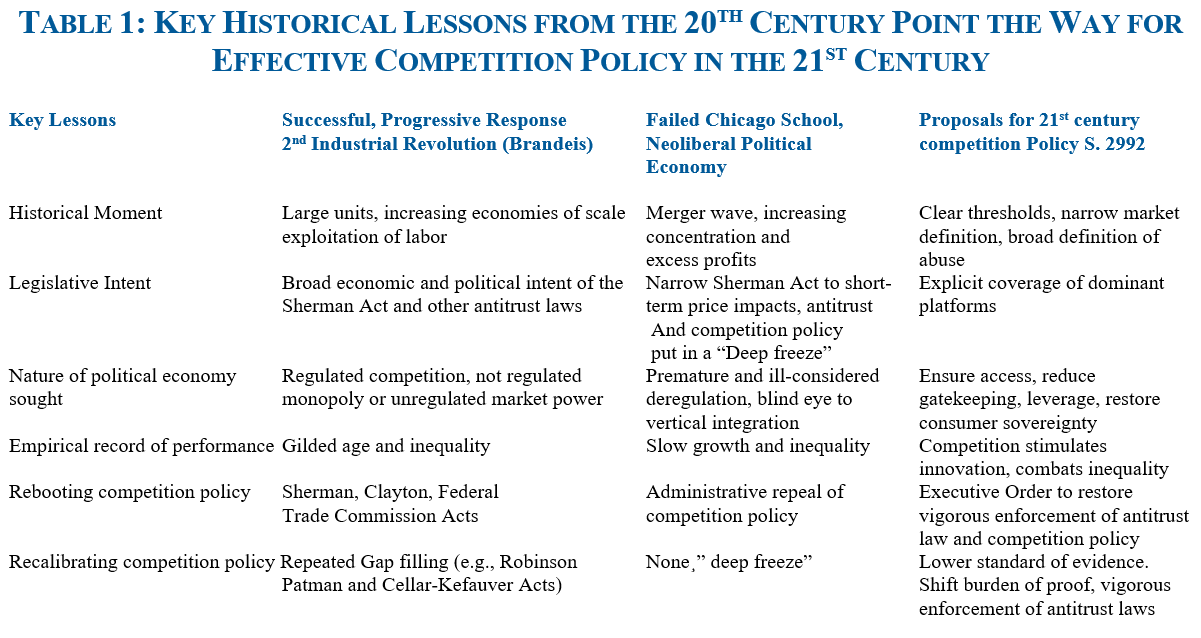 Actions to Revitalize Competition Policy in the 21st Century Economy

Here we apply the general framework we developed to analyze S.2992, which should be voted on as soon as possible in the Senate.  In order to appreciate the important role that S.2992, which recalibrates the antitrust laws, can play, it is important to be cognizant of the ongoing efforts to revitalize antitrust practice.

The “rebooting” of competition policy is well underway with the Executive Order entitled “Promoting Competition in the American Economy.” The Biden Administration signaled its intention to revitalize competition policy by listing 72 specific steps that can be taken by Federal agencies to “reboot” competition policy after a long period of lax enforcement that has put antitrust into a “deep freeze.”

For example, during the Biden administration, the Department of Justice (DOJ) has challenged well over a dozen mergers, with half resulting in divestitures, several withdrawn, and the remainder pending trial.  Some of these involved “cutting edge,” challenges.  DOJ challenged a merger between the number 4 and 5 publishing firms (Penguin Random House’s Acquisition of Rival Publisher Simon & Schuster), since the Merger Guidelines clearly indicate that four is too few.  The challenge is also a pure monopsony/harm theory (never litigated as the sole basis for a merger challenge).  The United Health/Health Change merger is being challenged as an aggregation of data resulting in market power for various health insurance analytics.  The American Airlines/JetBlue merger “agreement to share slots and revenue” is being challenged as a back-door merger— in an effort to prevent more direct and indirect coordination in the airline market.  This is in addition to vigorous enforcement of existing antitrust laws in price-fixing, bid rigging, money laundering, and labor market abuses.

The Federal Trade Commission (FTC) has challenged two dozen mergers, more than half of which resulted in the withdrawal of the proposed acquisitions, in sectors that were a particular public concern, health care, pharmaceuticals, and energy.  It challenged two vertical mergers, one in key digital technologies, and one in aerospace technology.  Such challenges were almost unheard of in the prior 40 years.  Perhaps the most aggressive example is the FTC’s proposal of a series of rulemakings under authority that had been dormant for a long period of time.

State Attorneys General also pursued complaints against Facebook and Google, and many other entities for violations of antitrust laws.

A private antitrust lawsuit, important in earlier antitrust practice, but also chilled by the “deep freeze,” has challenged Apple’s practices in restricting the behavior of application developers.  The Consumer Federation of America filed an amicus brief in that case.

Senator Amy Klobuchar, Chair of the Competition, Policy, Antitrust, and Consumer Rights Subcommittee of the Senate Judiciary Committee has not only shepherded bipartisan legislation through Committee, but has also written a lengthy text that analyzes the history of and lays out an agenda for revitalizing antitrust.  She cites Brandeis a dozen times, more than any other advocate of progressive capitalism, echoing his belief in competitive markets as the key to economic success and political democracy.

Indeed, to maintain a healthy economy, it turns out we need both sensible regulation and antitrust enforcement to protect against abuses of power… It is now crystal clear that the antitrust laws must be updated and made relevant again as part of a reinvigorated American competition policy.  We need to incentivize more competition and more innovation, not less, and need to make sure that American capitalism allows all to compete.  Everyone in America deserves a fair shot – and an honest opportunity – when it comes to realizing the American Dream… [T]here must be – at all times – an appropriate balance between antitrust and regulation.[3]

The American Innovation and Choice Online Act, S. 2992, addresses the key issues in a sector of the digital economy that has not been addressed by competition policy and antitrust law.  It targets Big Data Platforms, which can abuse their market power as gatekeepers and vertically integrated firms, using self-preferencing and data to block competition from independent developers of applications.  Harming competition in this sector can raise consumer prices, restrict consumer choice, and slow innovation.  Our framework shows that the approach taken in S. 2992 is balanced, allowing platforms to develop services, without undermining competition.

This is an ideal moment for Congress to play its important role in reinvigorating competition policy.  Addressing key aspects of Big Data Platforms is a good place to start, since this is an area of new and important economic activity and new challenges that have not been easily tackled by traditional oversight.

The American innovation and Choice Online Act, S. 2992, targets the sector with specificity, while ensuring a balance that invites innovation and practices by the incumbents that are not anticompetitive.  It sweeps in the traditional aspect of antitrust that practitioners have already begun to rebuild.  There are other areas of the digital economy that may also need Congressional action, like privacy, data use and abuse, and resources for responsible agencies.  However, the principle of tailoring the specific oversight to the specific challenges with a balanced approach is consistent with a century-long history of filling gaps in competition policy.  S. 2992 is the right approach to an important part of the problem.  It deserves a vote and passage in the Senate, so that the House can vote on and pass the bill later this month.