Supreme Court Weakens the Independence of the CFPB

The removal-for-cause provision ensured that the CFPB director could only be removed for “inefficiency, neglect of duty or malfeasance in office.” The positive aspects of the decision are that, because the Court found that this provision could be separated from the remainder of the Dodd-Frank Act, the rest of the CFPB will remain unaffected and that existing CFPB decisions remain in effect and enforceable.

The Supreme Court decision “…is troublesome for the independence of the CFPB,” stated Rachel Weintraub, CFA Legislative Director and General Counsel. “Created in the wake of the 2008 financial crisis, the CFPB was designed to be an independent agency that could consistently and vigorously focus on consumer financial protections. While today’s decision leaves the CFPB largely intact, eliminating the removal-for-cause protection may make directors hesitant to act independently of the administration, which does not serve consumers,” Weintraub added.

CFA, along with other consumer organizations, filed an amicus brief in the case arguing in favor of upholding the provisions and the independence of the agency. The groups argued in the brief that the Supreme Court has long upheld legislation that confers protection from at-will presidential removal on commissioners of the Federal Trade Commission, whose authority is similar to that of the CFPB.

“The CFPB survives this decision intact, but the important consumer watchdog has lost a crucial aspect of its independence,” said CFA Financial Services Outreach Manager Rachel Gittleman. “The Director should not be considering political priorities when enacting regulations, bringing enforcement actions, or holding financial institutions accountable. We hope that current and future CFPB directors will resist external and political pressures when executing their job to protect consumers in the financial marketplace,” she added.

Systemic Racism in Auto Insurance Exists and Must Be Addressed

Structural racism is being maintained in auto insurance, making state-mandated auto coverage more expensive for African American drivers than it is for white drivers, according to CFA research. The pricing disparities are driven in part by the use of several socio-economic factors in premium setting that do not reflect personal driving history but are proxies for race.

Over the past decade, CFA has issued several reports showing that auto insurance rating factors linked with individuals’ socioeconomic circumstances raise premiums for lower-income customers with clean driving records. What regulators, policymakers, and insurance companies must also acknowledge and address, according to CFA Director of Insurance J. Robert Hunter and Insurance Expert Douglas Heller, is that these socio-economic factors, which have nothing to do with driving, also disproportionately harm African-Americans.

“In every state, unfair discrimination is illegal, yet, on average, African American drivers still pay more for the exact same insurance coverage as white drivers,” Hunter said. “As long as insurance companies continue to use these proxies for race when setting rates, the industry will remain a part of the problem as will the regulators who allow it.” 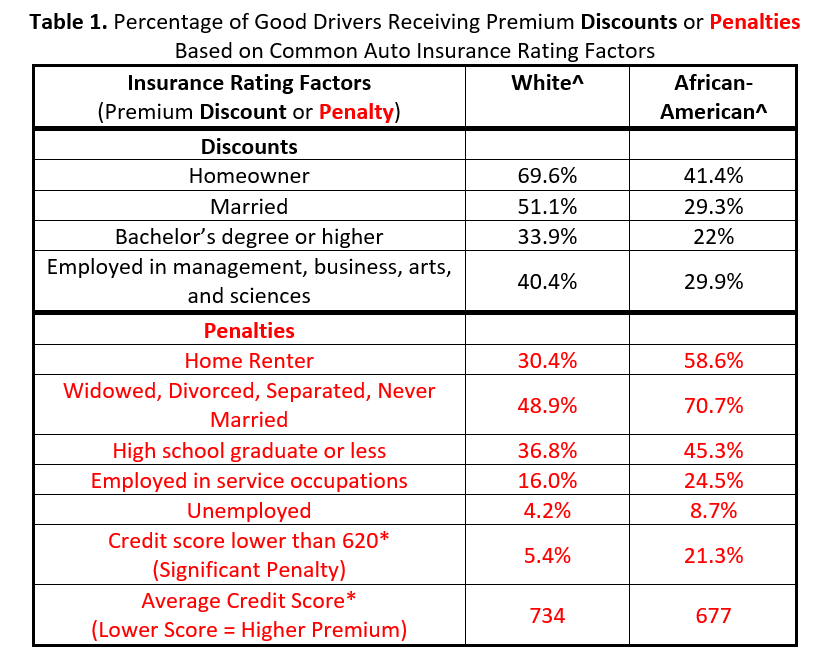 African-Americans are disproportionately represented in the higher premium categories. (See the table below.) The result of these practices is documented in a 2015 CFA report which found that ZIP codes with predominantly African American residents face premiums that are 60% higher than predominantly white ZIP codes, after adjusting for population density.

“When insurers base premiums on drivers’ socio-economic status, they are invariably doing so in a manner that disproportionately targets African Americans with higher prices,” Heller said. “The companies will insist that they never ask for a customer’s race, but if they are serious about confronting systemic racism, it is time they recognize that their pricing tools use proxies for race that make government-required auto insurance more expensive for Black Americans.”

As insurance commissioners begin to step up to address this structural discrimination, Hunter and Heller suggest steps that could be taken to begin the process.

“To truly reform the insurance market, the whole rating process should be placed under a microscope in order to end racially discriminatory pricing,” Hunter and Heller concluded.

The Department of Labor (DOL) took a number of actions in June that will simultaneously increase risks to retirement savers and weaken the standards that apply when they turn to financial professionals for advice about their retirement investments.

In a major threat to American’s retirement security, the DOL issued a final rule late last month reinstating an outdated, loophole-filled definition of fiduciary investment advice under the Employee Retirement Income Security Act (ERISA) that will enable financial professionals to pick and choose when they have fiduciary obligations to their retirement advice clients. Of particular concern, many if not most recommendations to roll money out of the relative safety of workplace retirement plans and into an Individual Retirement Account, where the protections are weaker, will not be held to a fiduciary standard.

“This action by the DOL will ensure that when the risks are highest, the conflicts of interest are greatest, and the sales rules are weakest, retirement savers will also be deprived of fiduciary protections under ERISA,” said CFA Director of Investor Protection Barbara Roper. “Financial professionals will be free to advise retirement savers to take a lifetime of hard-earned savings and plunge it into a high-cost, low-quality investment that saddles them with excessive risks and substandard returns. Workers and retirees will lose billions from their retirement nest eggs as a result,” Roper added.

Under a new exemption proposed by the Department, financial firms that are considered fiduciary investment advisers under ERISA would be held to a watered down standard based on the SEC’s recently implemented Regulation Best Interest (Reg. BI). But Reg. BI is not a fiduciary standard, and it allows a wide range of incentives that encourage and reward harmful advice. “Reg. BI looks indistinguishable from the previous suitability framework, which permitted a variety harmful conflicts of interest that would taint investment advice, to investors’ detriment,” said CFA Financial Services Counsel Micah Hauptman.

Moreover, the DOL is rushing forward with these changes without adequate time for interested parties to weigh in. The definition change was adopted as a final rule, and the DOL is providing only 30 days for comment on the proposed exemption. CFA joined with 20 other organizations to write to the DOL earlier this month urging an extension of the comment period. “The comment period is so unreasonably short that it won’t allow for the public to meaningfully comment on its contents,” Hauptman said.

At the same time as it was taking these actions to undermine the quality of advice workers and retirees get regarding their retirement savings, the DOL also issued a policy that clears the way for employers to include funds on their 401(k) plan menus that include exposure to risky private equity investments. CFA and 18 other organizations wrote to DOL urging the agency to withdraw the policy until it “can conduct a more careful and balanced analysis of the potential risks and benefits of including a private equity component in retirement plan investments.”

“The policy is based on a one-sided and inaccurate assessment of the potential risks and benefits of private equity investments, and it doesn’t include adequate safeguards to protect retirement savers,” Roper said. “As a result, it is likely to saddle middle-class retirement savers with high costs and lock them into unnecessarily complex investments that underperform publicly available alternatives. It should be withdrawn.”

A new proposed rule on Laboratory Accreditation for Analysis of Foods received support from food safety groups earlier this month, but they called on the Food and Drug Administration (FDA) to exercise its authority more broadly. Specifically, CFA and four other groups sent comments urging the FDA to require that any testing undertaken to comply with regulatory requirements come from an accredited laboratory.

The Food Safety Modernization Act, signed into law in 2011, gave the FDA new authority to set standards for laboratories that test food products for pathogens and other contaminants, but until this month, FDA had not exercised this authority. The groups, writing in support of the proposed rule, state that the move “is a step towards improving the reliability of testing used to ensure food safety.” However, the groups also expressed concern “that the agency has construed its authority too narrowly, requiring accredited testing only in a few circumstances outside the context of food imports.”

The groups emphasized the following points in their comment letter.

“Laboratory testing is a critical part of keeping America’s food supply safe,” said Thomas Gremillion, CFA Director of Food Policy. “But without adequate standards, all the negative test results are meaningless. FDA deserves credit for finally moving forward to implement this critical provision, but the agency should go further to protect consumers.”

As tech giants continue to gain power over the digital economy, Google’s recent proposed acquisition of Fitbit, the manufacturer of fitness trackers and other wearable devices, is causing serious concern for consumer and citizen groups. CFA and 19 other advocacy groups expressed this concern in an open statement earlier this month. Specifically, the groups urged regulators world-wide to scrutinize the merger, describing the proposal as “a test of regulators’ resolve to analyze the effects on competition of a tech giant acquiring a vast amount of highly valuable data through a takeover.”

The groups’ concern over data privacy is heightened due to the vast trove of health data, location data, and data collection capabilities that Fitbit currently has. Google could use this personal data to amplify its already commanding position in the digital economy as well as expand its inroads into health markets. “This would reduce consumer welfare…, limit innovation, and raise prices,” the groups wrote.

As the wearables market grows, the technology could replace smartphones as the main gateway to the internet for consumers. It may also give companies details of what consumers do 24/7, as illustrated by the way wearables are being used to track COVID-19 infections. While this particular use may be justified, the groups urged regulators to create strong safeguards against exploitation of the data in a commercial context.

If Google’s acquisition of Fitbit is allowed to proceed, it will provide the company with a clear road to expand into the $8.7 trillion healthcare market, undermining the ability of competitors to bring new products to consumers in the area of digital healthcare, the groups argued.

“This proposed merger is troubling enough from an antitrust standpoint, but what’s even more concerning is that we don’t have a comprehensive law in the United States to limit the collection, use and dissemination of individuals’ personal information,” said Susan Grant, CFA Director of Consumer Protection and Privacy. “The prospect of Google’s being able to combine the data it collects from people’s searches and use of other services it provides with the health-related data generated by Fitbit wearable devices, without any legal guardrails, is simply unacceptable.”