With the COVID-19 pandemic still ongoing, and claims remaining up to 50% below normal levels, CFA and Center for Economic Justice (CEJ) have called on insurers and insurance regulators to continue to provide ongoing auto premium relief. Having monitored crash data since March, the groups continue to find that fewer miles driven translates into fewer auto accidents – but this hasn’t in turn translated into premium relief for many consumers.

Building on previous reports, CFA and CEJ have monitored and analyzed crash data from various states’ Departments of Transportation. In Texas and Massachusetts, for example, there was an increase in the frequency of accidents in June relative to the spring. But even with that increase, crashes are still floating between about 12% and 50% below June 2019 levels. That is well outside of the range of any normal fluctuation, according to the CFA and CEJ analysis, and clearly indicates that drivers’ premiums remain excessive.

The groups previously wrote to insurance regulators in mid-March warning about windfall pandemic profits for auto insurers if regulators failed to act to protect consumers. While insurance commissioners in California, Michigan, New Jersey, and New Mexico took action to provide premium relief, most insurance commissioners did not, resulting in insurers now reporting massive profits, as predicted. While a few auto insurers have voluntarily continued their refund programs beyond May 31st, most companies have not.

“People are still out of work, staying home, and driving less. By failing to return the excess premiums that policyholders continue to pay, insurance companies are racking up huge unearned windfall profits while Americans are facing both financial devastation and a growing health crisis, while being in a state of general uncertainty,” stated J. Robert Hunter, CFA Director of Insurance.

The table below shows a breakdown of what companies are providing in terms of premium relief: 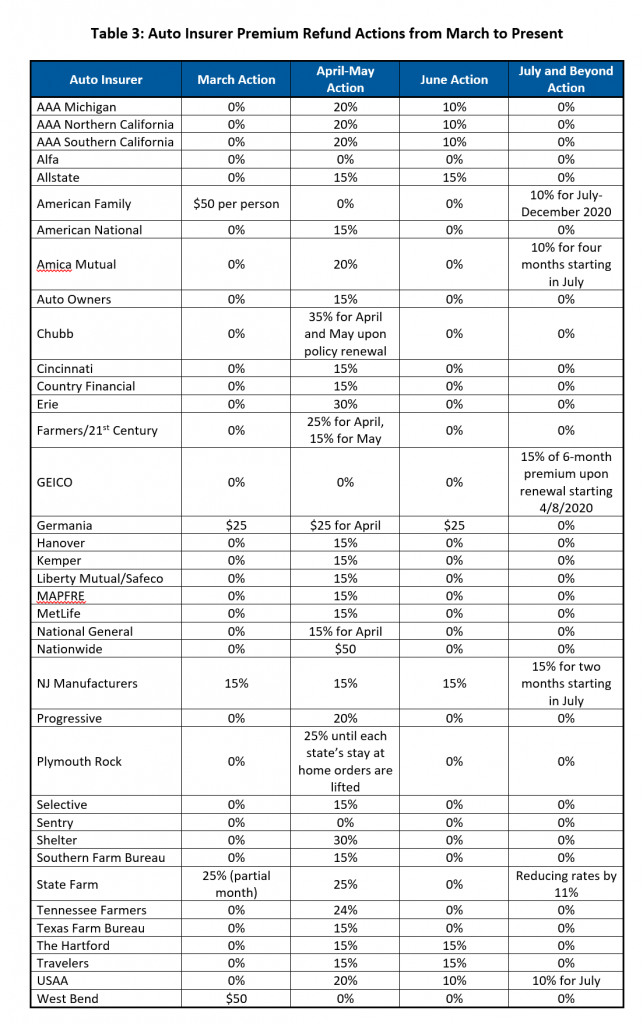 GEICO reaped a massive $2.1 billion in second quarter 2020 earnings before income taxes, compared with $393 million in Q2 of 2019. This five-fold increase in earnings prompted consumer groups to urge GEICO to return more of their pandemic profits to consumers.

“Most auto insurers announced automatic premium credits or refunds for consumers, however insufficient many of them were. But GEICO requires its customers to renew their policies before it will give the 15% credit, which also means millions of their customers have still not received a dime of the giveback that was promised as a response to the shutdown this past spring,” stated Hunter.

CFA and CEJ previously issued letter grades to auto insurers based on their premium relief policies. While few received an A, and most auto insurers received a C, GEICO was the only major insurer to receive a D-.

“Unfortunately, many insurance companies seem to think they did enough when they gave back a portion of the excess premium they collected this spring,” said CFA Insurance Expert Doug Heller. “But this pandemic persists across the country. The same reasons that made refunds necessary in the spring have continued into the summer, and state insurance commissioners should order insurers to return more premium rather than leave companies with another coronavirus windfall.”

In good news for consumers, the California State Senate has amended an insurance industry-sponsored package of homeowners insurance bills that would have led to premium hikes of at least 40% across the state and increased the number of Californians who struggle to find coverage. During its final committee hearing, the legislation was amended to create a process for assessing and addressing the increasing challenges in the homeowners insurance market related to devastating wildfires, without forcing an immediate spike in premiums through the deregulatory approach preferred by industry.

These changes come on the heels of a July letter to state legislative leaders from CFA Insurance Director Bob Hunter and a follow-up letter sent just ahead of the Senate Committee vote. In the letter, Hunter explained that the original version of the legislation would have allowed insurers to pass along all the costs of reinsurance to consumers, a move that has proved disastrous in states that allow it.

“In my actuarial opinion, just the provision … allowing unregulated reinsurance charges to be passed through to California consumers will immediately cause rates to rise by 40%,” Hunter wrote. “But not only will rates immediately jump across the board,” he continued, “this change will expose all California homeowners to periodic reinsurance-driven spikes in premiums of 50% or more and spates of non-renewals … [following] a major catastrophe in California or one outside of the state, like a series of hurricanes, or a tsunami on the other side of the world, or even a terrorist attack.”

Current California law prevents the pass-through of reinsurance costs, which has protected consumers from much higher premiums faced in other large states, such as Florida and Texas, and other wildfire-prone states like Colorado. And while insurers in California do purchase reinsurance, the premiums charged to customers reflect the actuarial rate the companies need to provide coverage without adding in the extra costs if companies decide to off-load some of their exposure to reinsurers.

While Californians on average pay much less for home insurance than the national average, there are many in wildfire-prone areas facing extremely high premiums. Rather than focusing energy and resources on reducing the threat of wildfires, “…th[is] legislation would increase profits for insurers without protecting homes from wildfire losses,” Hunter warned. That is because “the bill does not address the real issue: exposure to wildfire risk.”

“Allowing insurers to add unregulated reinsurance premiums into rates would neither lower rates, increase access, nor reduce risk in the state; indeed, it would do exactly the opposite,” Hunter concluded. CFA will be working with the California Department of Insurance to meet the new mandate of the legislation by providing consumer-oriented strategies for increasing home hardening efforts and protecting fairly priced homeowners insurance in the state.

As the nation continues to examine regulations around ‘Big Tech,’ reforming the nation’s century-old antitrust regulation has become a critical component to ensuring a fair marketplace that limits the harm monopolistic practices can have on American consumers. To assist policymakers in their examination of these issues, CFA released a new report earlier this month. Titled Pragmatic, Progressive Capitalism, it provides a comprehensive review of the successes and failures of previous antitrust efforts.

“In examining the size and scope of ‘Big Tech’ we are at a critical junction. The steps we take today can either further inhibit free market competition or open the door for more pro-consumer competitive products and services,” said CFA Director of Research and report author, Mark Cooper.

Putting the current situation in historical context, the report concludes that the policy principles needed today to prevent big data platforms and big broadband networks from strangling and distorting the development of the digital communications sector are the same principles applied a century ago to ensure the success of the 2nd Industrial Revolution in America.

While the report notes that the details must be worked out through antitrust and regulatory practice, Cooper offers some clear goals, reforms of process, and other factors, consistent with the Brandeis-Stiglitz model of pragmatic capitalism, that would speed and direct the development of oversight to protect consumers, while preserving the dynamic, digital economy. They include the following principles:

“By articulating the logic of progressive capitalism and demonstrating its success over the course of a century, this paper endeavors to give the electorate confidence in understanding that we do not need to reinvent or reimagine capitalism,” Cooper explained. “We need to get back to what worked so well for so long in the past. The long history shows that the model of pragmatic, progressive capitalism has not only been remarkably successful over a century and a half, it is as American as apple pie.”

In addition to prohibiting heightened line speeds during the COVID-19 crisis, the Safe Line Speeds During COVID-19 Act would also require the Government Accountability Office (GAO) to conduct a review of actions taken by the U.S. Department of Agriculture (USDA) and the U.S. Department of Labor in response to the pandemic to determine effectiveness of such actions in protecting animal, food, and worker safety.

A companion bill, H.R. 7521, was introduced in the House by Reps. Marcia Fudge (D-OH), Rosa DeLauro (D-CT), and Bennie Thompson (D-MS) earlier this month. Both bills received the support of a diverse coalition of groups, including CFA.

Slaughterhouses and processing plants have failed to protect workers from the rapid spread of COVID-19, resulting in more than 37,000 workers testing positive for the virus and over 160 workers and four inspectors having already died from COVID-19. Accelerated line speeds increase the risk to workers by making it more difficult to maintain proper social distancing.

COVID-19 has had a particularly severe impact on workers at slaughterhouses, where the virus has spread quickly and caused some plants to close temporarily. Despite this, in the midst of the pandemic in April, the USDA approved a record number of waivers for poultry plants to start operating at breakneck line speeds, allowing them to slaughter up to 175 birds per minute, instead of the previously-allowed 140 birds per minute.

Before negotiations broke down earlier this month over the latest COVID-19 relief bill, 93 advocacy groups, including CFA, joined together to urge Senate leadership to include consumer protections that will help “protect people’s finances so that they can weather this ongoing crisis and provide them with the stability they need to rebuild.”

The six policies the groups are advocating are:

“We urge the Senate to work together to provide relief for consumers during this pandemic and during this economic crisis,” stated Rachel Weintraub, CFA Legislative Director and General Counsel. “It is imperative that essential consumer protections be included in the next COVID-19 relief measure.”

“As COVID-19 continues to spread, it further wreaks havoc on millions of Americans and continues to have a devastating impact on the economy and household finances,” said Rachel Gittleman, CFA Financial Services Outreach Manager. “The Senate must join together to pass these common sense protections that will help consumers weather the storm.”

Meanwhile, a separate group of 17 organizations, including CFA, sent a letter to the Federal Reserve Board urging them not to weaken the Main Street Lending Program (MSLP), which is designed to provide financial support to small and mid-sized businesses during the crisis. In their letter, the groups expressed concern that private equity owned companies could gain inappropriate access to Main Street Lending Facilities without imposing strict conditions to protect public funds from being diverted from their public purpose by the private equity owner.

In addition to outlining recommendations for how to prevent exploitation and abuse of the MSLP, the groups reiterated the need “to impose meaningful conditions around retaining jobs, worker safety, or adequate protections against diversions to executives for all companies, including those that are owned or controlled by private equity firms.”