Amid reports that state insurance regulators are poised to move forward with a new industry-friendly, anti-consumer model rule, CFA and the Center for Economic Justice wrote to members of the National Association of Insurance Commissioners (NAIC) earlier this month urging them to reject the current draft and continue work to create a true “best interest” standard of care for insurers, agents and brokers when selling complex annuity products to consumers.

“The fact that all the industry trade associations of insurers and agents selling annuities are euphoric about the proposed revisions while consumer groups are aghast at the anti-consumer nature of the proposal is stark evidence of how biased the proposal is in favor of industry interests over consumers,” said CEJ Executive Director Birny Birnbaum. “By allowing insurers and producers to falsely claim to be acting in consumers’ best interest when there is no such requirement and when there is no meaningful constraint on conflicts of interest that would compromise advice given to a consumer, the proposal will mislead consumers into expecting protections the rule does not provide.”

CEJ and CFA identified the following as particularly critical shortcomings in the current draft:

“The Committee obviously drew heavily on the SEC’s Regulation Best Interest in developing its model, despite the fact that Reg BI has been strongly opposed by investor advocates, is the subject of a legal challenge by several state attorneys general, and has been criticized by state securities regulators as inadequate, prompting some to draft their own, stronger regulations,” said CFA Director of Investor Protection Barbara Roper. “Worse, although annuities sales are an area in particularly urgent need of reform, the NAIC model is actually substantially weaker than the SEC rule in several important ways. Under no circumstances should NAIC adopt this proposal in its current form,” Roper added. “To do so would be a complete dereliction of its duty to protect insurance consumers.”

The U.S. Food and Drug Administration (FDA) would gain a new tool to help fight and solve foodborne illness outbreaks under legislation introduced late last month by Sen. Kirsten Gillibrand (D-NY). Rep. Rosa DeLauro (D-CT), chair of the Congressional Food Safety Caucus, introduced a companion bill in the House on December 11. CFA and members of the Safe Food Coalition threw their support behind the bill which, the groups claim, is more important than ever in light of yet another outbreak linked to romaine lettuce from California.

The Expanded Food Safety Investigation Act of 2019 (S. 2958) would give FDA the authority to conduct microbiological sampling on concentrated animal feeding operations (CAFOs) so that foodborne illness outbreak investigators can more effectively trace back the source of pathogens.

Under current law, federal authorities need permission to enter the premises of a CAFO to conduct sampling in connection with a foodborne illness outbreak investigation. This limitation came to the forefront during last year’s Yuma Romaine lettuce E. coli outbreak, which killed five people. During that investigation, samples taken from canal water in the area suggested that the source of the outbreak may have been a large cattle CAFO in the area. Unfortunately, investigators were permitted to take only a handful of samples at the feedlot before the company decided to shut off access.

“It is outrageous to think that a multi-million dollar company would be allowed to obstruct a foodborne illness outbreak investigation. A safe food supply is founded upon transparency and accountability,” said Thomas Gremillion, CFA Director of Food Policy. “The Expanded Food Safety Investigation Act of 2019 gives food safety regulators the power they need to protect consumers, and puts public health ahead of industry profits.”

Each year, nearly one in six Americans are sickened, 128,000 are hospitalized, and 3,000 die as a result of foodborne illness, according to the Centers for Disease Control and Preventions (CDC). CAFOs contribute to this disease burden both by contaminating nearby produce fields, and by spreading virulent, antibiotic resistant “superbugs” directly to consumers of meat and poultry products.

“Laws like this one, that will make our food supply safer, are cost-effective and widely supported by voters,” said Gremillion. “No company should be allowed to burden consumers with secrets costs associated with its product.”

Automakers Side with Trump on Gutting the Clean Air Act

Fifteen automakers, including GM, Fiat-Chrysler, and Toyota, have joined with the Trump Administration in its efforts to dismantle the Clean Air Act (CAA) and the authority which it grants to states to advance clean car standards that save families money at the pump. In response, CFA has mounted a public awareness campaign.

“These automakers had a choice, and they chose wrong,” said CFA Executive Director Jack Gillis. “They could have sided with their customers and the four other automakers (Ford, Honda, Volkswagen, and BMW) that already voluntarily agreed to a set of reasonable, achievable standards which lead to fuel savings, but instead, they’re following Trump down a dead end road,” Gillis continued.

Spearheaded by California, the states have offered a counter framework for a national clean car solution which is far more effective than the one being proposed by the Trump Administration. Four automakers, Ford, Honda, Volkswagen, and BMW, have already chosen to sign on to this agreement showing that they are “placing themselves on the right side of history by providing consumers what they want and deserve, which is the safest, cleanest, and most fuel-efficient cars possible.”

As part of this agreement, these four automakers vowed to uphold that the CAA that grants states the authority to adopt clean car standards that are stronger than federal standards. Already, states representing 55% of all vehicles registered in the United States have sued to defend this state authority granted by the CAA. “This is federalism at its best—when the federal government fails to meet the needs of the people, the states step in,” added Gillis.

The other automakers, those supporting the Trump Administration rollback, “are going against both market and consumer demand. Customers want to pay less at the pump, whether they own a Prius or drive a GM pick-up. The future is efficient vehicles,” Gillis said. “When gas prices spike, will GM and Chrysler need another government handout in order to survive?”

In the wake of the 2009 gas spike, many automakers were caught flat-footed, resulting in lost market share and decreased profits and eventually leading to the bankruptcy of two major American automakers. “Joining the agreement will create a critical safety net, ensuring that they deliver the cost saving, clean, and technologically sophisticated vehicles that consumers want, thereby keeping their companies in the ‘black’,” said Gillis.

“In short, the state led voluntary agreement is in the best interests of both their companies and their customers,” said Gillis. “Joining that agreement and choosing to stop defending Trump in his efforts to dismantle the Clean Air Act, would clearly demonstrate their commitment to meeting the desires of over 80,000,000 Americans who have consistently supported improved clean car rules and who will purchase vehicles impacted by the standards.”

With Congress beginning to tackle the issue of consumer data privacy, privacy advocates sent a letter to members of the Senate Commerce Committee voicing its support for the Consumer Online Privacy Rights Act (COPRA) and stating its concern over two other bills which fail to adequately protect consumer data. The letter, sent by 17 groups including CFA, builds on previous advocacy in which the groups laid our four principles for creating meaningful and effective federal privacy legislation:

COPRA, which is one of the strongest privacy bills introduced to date, according to the groups, incorporates all four of these principles. The bill encompasses a framework similar to FIPs, which provides a good start toward needed protections such as data minimization, purpose specification, and access and correction rights, the groups wrote. It would protect civil rights with strong antidiscrimination provisions covering protected classes in key contexts like housing and employment. It would give states and individuals the ability to enforce the law and would preempt state laws only where they directly conflict with federal provisions—allowing states the ability to innovate and provide additional privacy protections as technology evolves. Last, it would broadly define harms and “covered data,” allowing redress for intangible harms.

By contrast, according to the groups, the United States Consumer Data Privacy Act of 2019 (USCDPA), fails to meaningfully fulfill the principles outlined by the groups. The bill does not protect civil rights—it merely grants the Federal Trade Commission (FTC) a supporting role to work with other agencies, which the FTC can already do, and requires the FTC to publish biennial reports on algorithmic bias. The bill’s enforcement provisions are also insufficient, particularly because individuals cannot vindicate their rights in court. Additionally, USCPDA allows for so-called “approved certification programs” (also known as “safe harbors”), which may allow the largest companies to write their own compliance regimes, likely amounting to little more than ineffective self-regulation. The bill also includes an extremely broad preemption provision that would remove state legislatures completely from protecting privacy, including in specialized areas like employee and student privacy where the USCPDA offers no new protections.

The third bill, the Balancing the Rights of Web Surfers Equally and Responsibly Act (BROWSER), is similarly insufficient, according to the groups. In that bill, the primary substantive protection provided is a requirement that online companies obtain opt-in approval from users for the use or disclosure of “sensitive” information, which is defined much more narrowly than in COPRA. The substantive protections are far from comprehensive, with no data minimization, data quality, or user rights included. It offers no protections for civil rights violations, nor does it allow states or individuals to enforce the law through a private right of action. “Legislative proposals should not place the entire burden of protecting privacy on individuals by (perhaps) giving them more notice yet providing them with no additional protections, including a private right of action, against abuse and misuse of their data once collected,” the groups wrote.

“We are encouraged by the fact that members of Congress are interested in enacting privacy legislation, but it’s got to hit the marks that we’ve set for effective privacy protection,” said Susan Grant, CFA Director of Consumer Protection and Privacy. “It’s not helpful and would actually be a step backwards if we have a weak federal law that preempts the states and does not allow consumers to enforce their rights.

CFA Executive Director, Jack Gillis released his Ten Tips for Holiday Shoppers this month in response to retailers’ “upping the ante” this year. With all the door busters, midnight specials, black Friday events, and other holiday incentives, it is important for consumers to protect their wallets during this holiday season with the following tips:

CFA had a great turnout for its 16th annual High Cost Lending Summit earlier this month. The Summit is an excellent opportunity for state and local groups to come together and brainstorm ways to have impact on several high cost lending topics including the recent passage of interest rate caps in some states, the push for a national 36% usury limit, the rent-a-bank threat in states with interest rate caps and wage advance products. State advocates have been working on all of these issues and the Summit provides an opportunity for those on the front lines to share what tactics have been successful, what to watch out for, and also to hear about new efforts groups will be undertaking in the next legislative session. We were happy to have attendees representing 24 states and the District of Columbia attend the event this year. A huge thanks to our outstanding speakers and panelists as well! We look forward to seeing even more attendees and states represented at next year’s 17th Annual High Cost Lending Summit. 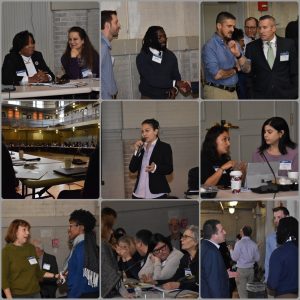